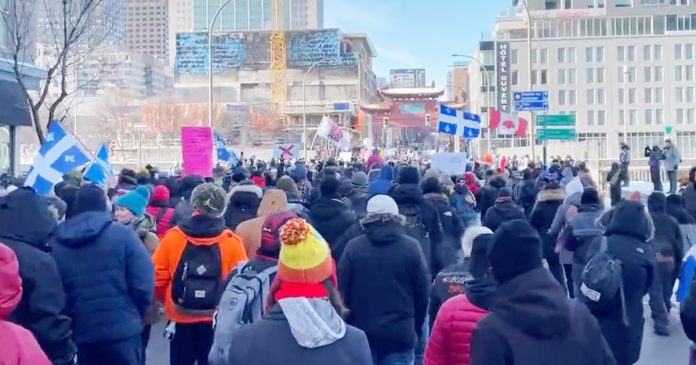 People’s Party of Canada leader Maxime Bernier was among thousands of people who attended a protest in Montreal against mandatory COVID-19 vaccines and vaccine passports on Saturday.

Bernier said in a video posted to Twitter that while the temperature in Montreal was cold, it would not stop the crowd from protesting. He said people are ready to fight for their rights.

“We are saying no to these draconian measures, no to more lockdowns, no to vaccine passports and no to the delusion and segregation that our establishment leaders are imposing on us right now,” he said.

Bernier said he wants to unite everyone under “the freedom umbrella.”

Protestors waved Quebec and upside-down Canadian flags as they marched through the streets of Old Montreal. Some of them held signs with statements such as “Unvaccinated lives matter,” “Free choice” and “Legault has got to go.”

Quebec health minister Christian Dube announced on Thursday that the province would be expanding its vaccine passport system to require a third shot.

Dube did not provide a set date for the change although he said it would be made once all Quebecers were eligible for a third dose.

Quebecers can currently receive a third dose only if they are 45 years old or older, but all adults will be able to receive the booster shot on Jan. 17.

Dube also said that as of Jan. 18, people would be required to show vaccine passports to buy alcohol at the province-run Société des Alcools du Québec, or cannabis at the Société Québécoise du Cannabis.

Furthermore, Dube said Quebec would be expanding vaccine passports into other non-essential businesses such as personal care services. This announcement would be made in the coming days.

“By limiting the places (the unvaccinated) can go, we’re limiting their contacts,” he said. “If you don’t want to get vaccinated, stay home.”