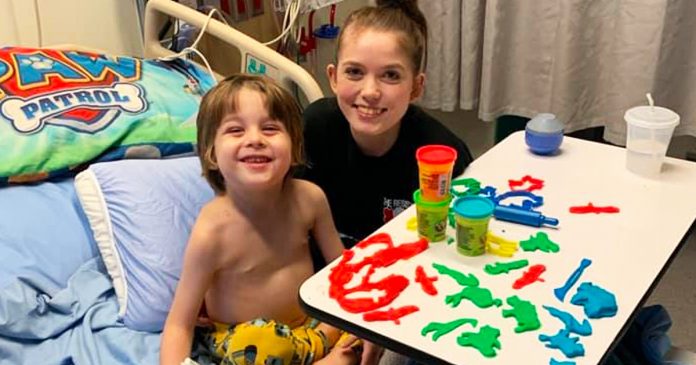 A young Kelowna family says it is being evicted from Ronald McDonald House (RMH) in Vancouver where their 4-year-old son is fighting leukemia because they don’t have COVID shots.

“My wife Lindsey was crying on the bed,” Austin Furgason told True North on Tuesday night. “I told her, I’m going to go ask the manager about this because this isn’t even real.”

RMH is a charity that provides families with a place to live while their children fight serious illnesses at nearby hospitals. They have locations around the world.

Furgason provided True North with a copy of the policy given to his family by RMH on Monday.

“Beginning January 17, 2022, everyone five years and older who are working, staying or visiting our facilities (both the House at 4567 Heather St. Vancouver and at the Family Room in Surrey Memorial Hospital) must show proof of full vaccination (two doses), in addition to completing our existing screening, unless an Accommodation has been sought and has been explicitly approved and granted by RMHC (Ronald McDonald House Charities) in writing,” it reads.

The notice, signed by Senior Director of Family Services Leslie Louie, adds that families already staying at RMH have until Jan. 31 to get their first COVID shot.

Furgason, who just earned his electrician’s ticket over Christmas, pleaded with RMH staff in a seven-minute-long video posted to Facebook on Tuesday. In the video, he tells RMH staff that the COVID shots do not stop transmission and that his family’s eviction was an affront to the country’s national anthem.

He told True North that Canada is a country that doesn’t exclude people.

“No matter what people’s beliefs are, everyone donates to this place because everyone wants to save dying kids,” he said. “If there was anything left to unite our country, this would have been it. And still, they find a way to segregate us and divide us even more.”

“I’m broken inside for our country just how fast this has accelerated.”

Furgason’s family of 4 has been staying at RMH since October, when their 4 year-old son Jack began treatment for leukemia.

“Our kid’s been doing really good,” Furgason said. “God’s been doing miracles for our kid. His hair was supposed to fall out 2 months ago, and it never did. He’s got lots of energy, he’s super positive. Everything was going great.”

Furgason said that after getting the notice, he was up all night thinking about what to do.

“I felt like God was in my heart telling me, you have to address this as a man, you have to expose this for what it is,” he told True North. “There’s no way they can just do that. It’s evil.”

In the Facebook video, Furgason tells RMH staff that his family has all their other immunizations but decided not to take the COVID-19 vaccine. Furgason reiterates that his family are not “anti-vaxxers” and that he is most concerned about the safety of the recently approved vaccine for children.

“They just approved (the COVID vaccine) for kids,” he told True North. “And even if you’re a vaccinated adult, like Ben Shapiro for example, he says, ‘get vaccinated,’ but he says he’s not going to vaccinate his kids – they don’t need it.”

Furgason says his son’s cancer treatments will hopefully be over in June and is asking anyone who might know somewhere in Vancouver his family could stay to get in touch with him. A friend also launched a GoFundMe page in October on the family’s behalf.

True North reached out to Ronald McDonald House in Vancouver and will update this story when a response is received.