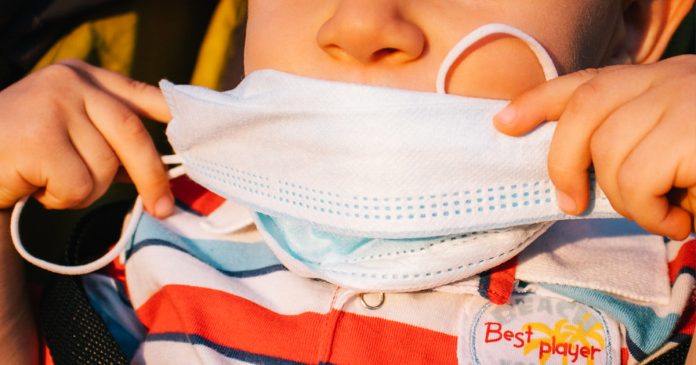 Various experts are speaking out against mandatory masks for children five years old and under despite many Canadian jurisdictions recommending or requiring them for young kids.

The World Health Organization (WHO) has said clearly that children five years old and under should not be required to wear masks “based on the safety and overall interest of the child and the capacity to appropriately use a mask with minimal assistance.”

Despite this advice, Health Canada has told children two years old and up to wear them.

Kindergarten students at schools in the Toronto District School Board (TDSB) were ordered to wear masks starting in September. A memo issued by the TDSB in August informed parents of the policy even though it goes against the Ontario government’s own guidelines, which require only students in Grade 1 and up to wear masks.

“I just feel very strongly that we need to be proactive with this and protect students and staff the best we can with the masking,” said Pickering trustee Chris Braney.

“I think it is a bad policy choice,” said Prasad. “There is no credible evidence to show that this policy will slow the spread of the virus in the short term or long term.”

Prasad added that masks for young children might make it difficult for them to communicate and cause them to miss out on seeing the facial expressions of their classmates.

“For this small group of students, they would be at a disadvantage by not seeing their educators’ mouths,” said Cunningham. “(With) other students who might have more of a hesitancy with speaking, the mask might act as a barrier to allowing them or promoting them to speak out loud.”

Cunningham said these disruptions to speech are a risk factor for language development for younger students, as teachers should be encouraging them to produce and listen to regular speech. He said that teachers should better explain phonetic sounds to mitigate these risks.

Prasad added that in times of crisis, it is reasonable to try ideas without solid evidence, but he gives that practice a six-month grace period.

“When you enter year two, you have to show what you’re recommending works,” he said. “They simply have never done that for masking young children.”

The WHO and UNICEF said in 2020 that children five years old and under should not have to wear masks. The organizations argued that young children are less susceptible to COVID-19 and unlikely to spread it to other people.

“According to the limited available evidence, young children may have lower susceptibility to infection compared to adults, however available data suggests that this may vary by age among children,” they said.