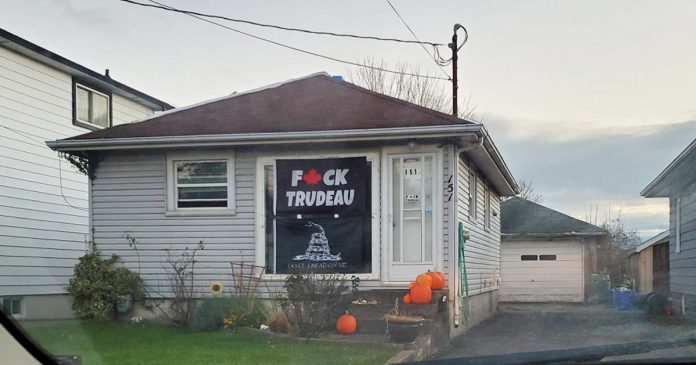 The City of Port Colborne has backed away from ordering a woman to remove a popular anti-Trudeau flag from the front of her home.

The Canadian Constitution Foundation (CCF) made the announcement Thursday, calling it “a victory for freedom of expression.” The constitutional rights charity had been working with lawyers and the homeowner since November to challenge the city’s order.

“The city of Port Colborne was wrong to ever issue this order, which violated Melissa’s right to freedom of expression,” said CCF lawyer and spokesperson Christine Van Geyn. “We are pleased that the city has acquiesced under threat of legal action, but no Canadian should ever need to threaten to go to court in order to exercise the rights they are guaranteed under our constitution.”

Melissa, a working mother, said she had originally flown the “F*CK TRUDEAU” flag as a protest against the results of the Sep. 2021 federal election.

The “*” in “F*CK TRUDEAU” is represented by a maple leaf.

Port Colborne residents complained about the flag when it was first displayed, and in November the city sent Melissa a bylaw order requiring her to remove it. Melissa filed notice and paid $260 to challenge the order but was initially told her appeal would not be heard.

The CCF, which agreed to support Melissa’s fight against the order, called flying the flag a constitutional freedom.

“Like every citizen of Canada, Melissa has a Charter-protected right to express her political views,” Van Geyn said. “She is flying a flag on her own property, expressing a political sentiment that frankly is not even that uncommon. If her flag bothers some people at Port Colborne city hall, I suggest they drive down a different street instead of trying to tell Melissa what she can and cannot say.”

On Thursday, the City of Port Colborne rescinded the order and refunded Melissa’s $260 fee.

“I am so happy that the city of Port Colborne has backed down on their attempts to silence me,” Melissa said. “I’m proud to continue to be able to express my political views, which is my right as a Canadian.”

F*CK TRUDEAU swag – including bumper stickers, mugs, hoodies and hats – has become a common sight in many parts of Canada. The online marketplace Etsy.com offers a wide selection of these products.