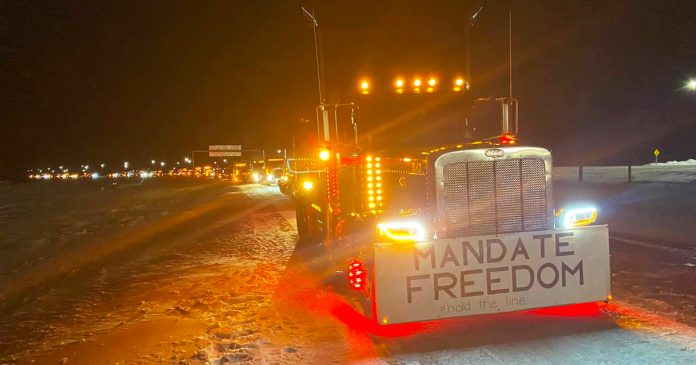 A rolling protest by a transport convoy at the Manitoba border crossing has already led to major delays for travellers hoping to cross into the US.

According to one driver, trucks are blocking all lanes at the border as they slowly follow a circular route along Hwy. 75 while blasting horns in opposition to the federal government.

On Friday, industry leaders blasted the federal government for its confusing messaging after Liberal health minister Jean Yves-Duclos announced a prior reversal of the policy had been “provided in error” and that unvaccinated essential workers would indeed be turned away at the border.

“With the news circulating on the 13th, and no clarification or correction in messaging… many carriers then dispatched some unvaccinated drivers into the U.S. to cover loads that needed to be delivered,” said Millian.

“This 16-hour period of silence has thrown many drivers’ lives into upheaval and will leave some having to quarantine at home for 14 days as a result of an erroneous message from government officials.”

The Liberal mandate will impact up to 26,000 Canadian and US truck drivers who regularly transport essential goods across the international border, potentially causing nation-wide goods shortages and a strain on the already fragile supply chain.

“We already have a fractured supply chain, and if we damage that, the supplies that we need for our own health and safety – we’re going to see a shortage,” said Millian.

Despite warnings that the mandate could have devastating effects on Canada’s economy, Duclos has insisted that barring unvaccinated truckers who were once considered essential workers is the “right thing to do.”