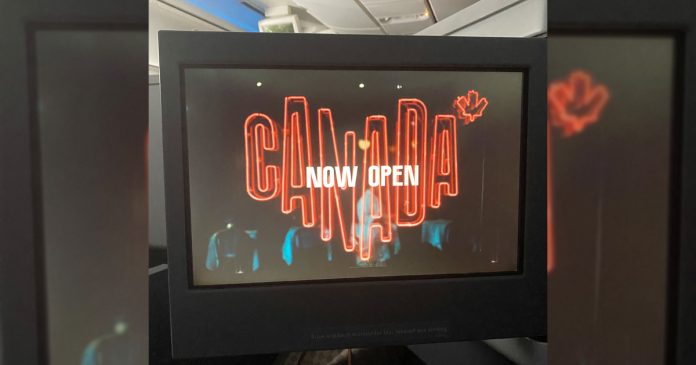 Despite much of the country back under COVID-19 lockdowns, a tourism advertisement made by Crown corporation Destination Canada is claiming Canada is “now open” and “ready to welcome (tourists) back.”

According to Destination Canada spokesperson Jennifer Peters, the “in-flight entertainment” ad is airing on American Airlines and United Air flights. It debuted on Dec. 1, 2021 and will continue to be broadcast to travellers until Feb. 28, 2022.

“When Destination Canada initially provided this content, there were signs of recovery and the current restrictions were not in place, so the messaging was appropriate at that time,” Peters told True North.

When asked what the advertising campaign cost Canadian taxpayers, Peters claimed that the price tag was confidential.

“We do not disclose costs of specific campaigns, as this is commercially competitive information,” said Peters.

According to Canadian Taxpayers Federation federal director Franco Terrazzano, taxpayers have a right to know the cost of such campaigns.

“Taxpayers are paying the bills so we deserve maximum transparency. Bureaucrats need to remember that they work for taxpayers, and we have a right to see the total bill,” said Terrazzano.

“Taxpayers should question whether these ads are good value for money when many Canadians are locked down and can’t even go to the gym or a bar.”

Quebec instituted its latest bout of lockdown shortly prior to the New Year. At the time, Premier Francois Legault announced that a curfew would be in effect for all residents of the province and that restaurants would shut down their businesses for indoor dining.

British Columbia announced Monday that it was indefinitely prolonging several of its COVID restrictions, including closing gyms and bars, and 50% capacity at numerous venues.

New Brunswick returned to a level 3 lockdown last Friday, the most restrictive stage of its government’s COVID response system.

Meanwhile, Canadian airlines including Air Canada and WestJet along with the Toronto Pearson International Airport have urged the federal government to drop mandatory testing requirements at airports.

Due to federal and provincial COVID-19 orders, Canada’s tourism industry has taken a crushing blow during the pandemic. Estimates show that tourism in Canada has collapsed by more than 50%.

Prior to the pandemic, the industry was raking in $105 billion a year, compared to $53 billion annually since it began.

Destination Canada already has another ad campaign ready for this spring that will be shown to travelers on the same airlines beginning March 1.

“The updated video will be more aspirational in nature and aligned to future travel considerations,” Peters told True North.
A copy of the updated advertisement is currently available for viewing on Youtube.