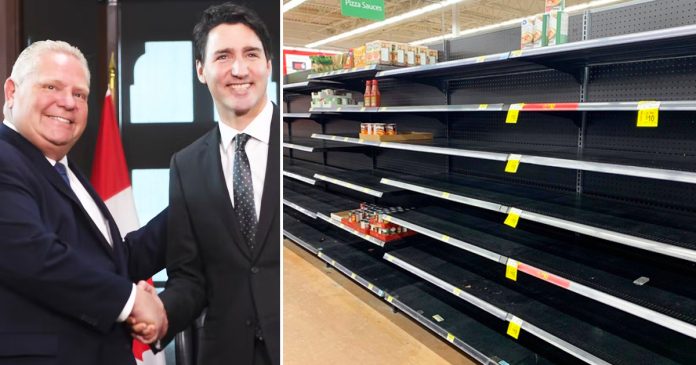 “The numerous images and stories from constituents and citizens of Ontario that have been shared with my office illustrates that the collapse of the supply chain has begun,” said Hillier in a press release. “It is clear that the looming crisis Canadians are beginning to face is not the result of a virus but a product of the orders and fiats of both our premier and the prime minister.”

Hillier said a number of small and medium shipping companies across Canada have closed over the last two years.

He said the shuttering of businesses and Ontario premier Doug Ford’s pressure on employers to mandate COVID-19 vaccines “are just some reasons that contributed to these closures.”

Prime Minister Justin Trudeau’s requirement that truck drivers crossing the Canada-US border and the delays they face while crossing “means the lines to our stores and supermarkets are being irreparably damaged,” said Hillier.

Hillier called on Ontarians and truck drivers to “raise your voices against the Premier’s and Prime Minister’s edicts before basic necessities for life are unavailable.”

“All of Canada’s provincial Premiers and the Prime Minister must immediately revoke all mandates and orders that are collapsing our economy and destroying our freedoms,” he said.

Hillier had warned about these concerns in a letter he wrote in March 2020, one day after the lockdowns in Ontario began.

He said that the Ontario government should think about rising unemployment, business closures and disruptions to supply chains before continuing to keep people locked down.

“It appears the cure we are administering may eventually be worse than the disease we are attempting to treat,” he said.

Contrary to Hiller’s claims, Loblaws spokesperson Mark Boudreau told the CBC that bare shelves in grocery stores are due to inclement weather.

“I know that with the weather, some of our stores are facing some issues, which are typical of this time of year,” said Boudreau.

He said that the shortages would not be a long-term issue.

Conservative MP Pierre Poilievre said on Wednesday that the vaccine mandate for truck drivers is “going to drive up the costs for our people, drive people out of work and leave us with empty shelves.”