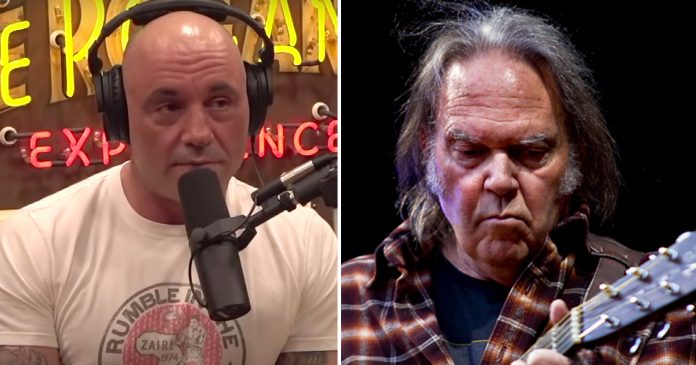 Canadian-American rock star Neil Young made an ultimatum to Spotify on Monday, telling them that if they don’t drop “The Joe Rogan Experience,” they can say good-bye to his music.

“They can have Rogan or Young,” he said. “Not both.” The 76 year-old singer’s demand was first reported by the Guardian and included in a letter since deleted from his website.

“I am doing this because Spotify is spreading fake information about vaccines – potentially causing death to those who believe the disinformation being spread by them,” wrote Young. “Please act on this immediately today and keep me informed of the time schedule.”

“The Joe Rogan Experience” is the most popular podcast on Spotify not only in Canada but also in the English-speaking world. Whereas Neil Young’s channel has just over 6 million listeners per month, Rogan’s podcast has an estimated 200 million monthly, or 11 million per episode.

“The Joe Rogan Experience,” Young said, has “tremendous influence.” Young added that Spotify needs to act to stop the spread of inaccurate information about COVID-19 vaccines.

In January, a group of “scientists, medical professionals, professors, and science communicators” wrote a letter to Spotify after Rogan hosted a talk with Dr. Robert Malone the previous month. A closer look at the letter revealed that the majority of its signatories were not direct medical providers or practitioners. About 100 hold a PhD but do not practice regularly.

Malone, a virologist and immunologist who pioneered mRNA technology, has questioned the prevailing narratives surrounding COVID-19 and has been accused of spreading misinformation about vaccine efficacy.

The letter requested Spotify put in place a misinformation policy to stop “the misleading and false claims” Rogan has made, adding the host’s comments were  “provoking distrust in science and medicine.”

Young has a history of campaigning for left-wing causes.

In 2014, he criticized former prime minister Stephen Harper and Alberta’s oilsands, comparing a Fort McMurray industrial site to Hiroshima after it had been hit by a nuclear bomb.

“Canada is trading integrity for money,” Young said. “That’s what’s happening under the current leadership in Canada, which is a very poor imitation of the George Bush administration in the United States and is lagging behind on the world stage.”

In 2006, Young released a song called “Let’s Impeach the President,” which called for US president George W. Bush to be removed from office.

Young’s music remains on Spotify as of Tuesday.