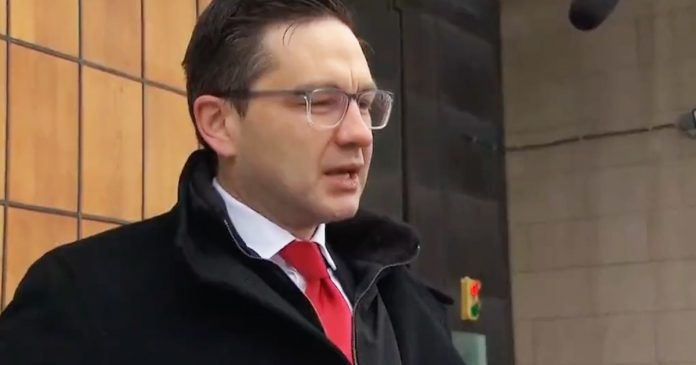 Conservative MP Pierre Poilievre gave mainstream media reporters a smackdown on Thursday after they attempted to smear the Truckers for Freedom Convoy as extremists.

“Well, you know, what I think is interesting is that when there’s a left wing protest on Parliament Hill, we don’t see the Liberal media going through every single name of the people who attend to try and find one person they can disparage the whole group with,” said Poilievre.

Poilievre made the comments in Ottawa after journalists asked for comment on allegations that “extreme elements had latched onto the truck convoy.”

A number of articles by mainstream outlets have sought to paint the truckers convoy which is protesting COVID-19 mandates and deterioration of freedoms as so-called “white nationalists,” “far-right” and “domestic terrorists.”

“The CBC for example has been accused by its own employees of systemic racism and yet we don’t see the media here generalize that everyone who works at the CBC is a racist,” Poilievre added.

“Whenever you have five or ten thousand people who are part of any group, you’re bound to have a number who have or say unacceptable things and they should be individually responsible for the things they say and do,” Poilievre added.

“But that doesn’t mean we disparage the thousands of hardworking, law-abiding and peaceful truckers who quite frankly have kept all of you alive for the last two years by filling your grocery shelves with the food that you eat and filling your homes with the products that you rely upon.”

Pierre nails it! “When there is a left wing protest you don’t see the Liberal media going through every single name… to try to find one person that they can disparage the whole group with.” The corporate media are working overtime to discredit the protests. https://t.co/wVKKHAUR6h

“Pierre nails it!” wrote Scheer. “The corporate media are working overtime to discredit the protests.”

Besides penning an op-ed yesterday, CPC leader Erin O’Toole has largely been silent on whether he supports the trucker’s convoy, going so far as to repeatedly evade questions about whether he would meet with organizers when they arrive in Ottawa.

A number of Conservative EDAs have called for an early leadership review on O’Toole’s 2021 election performance and according to a recent poll 17% of CPC supporters preferred Poilievre over O’Toole who only scored 10% in support.