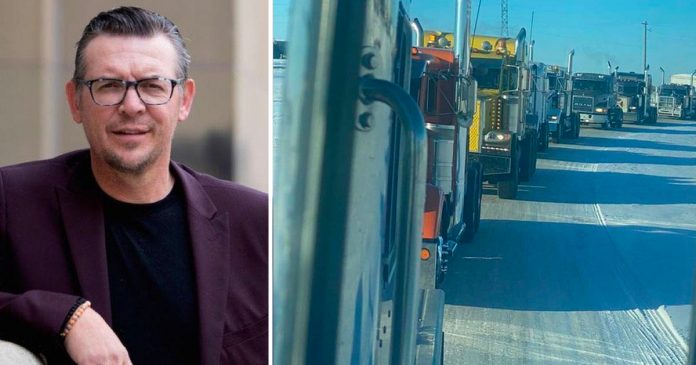 Canadian hockey legend and Olympic gold medalist Theo Fleury spoke in support of the Truckers for Freedom Convoy on Fox News’s The Ingraham Angle on Wednesday.

During the interview, Fleury blasted Prime Minister Justin Trudeau for ignoring the broader concerns of Canadians and focusing solely on COVID shots despite Canada having some of the highest vaccination rates in the world.

“It’s just straight vaccines, but what’s happening is right now in Canada we have one of the biggest revolutions happening and you probably haven’t heard about it because nobody’s talking about it. But right now, there’s 50,000 truckers and about 1.4 million people headed to the parliament in Ottawa, and they’re going to stay there until Trudeau resigns or they give us back all of our freedom and rights.”

Fleury also blasted Trudeau for his divisive tactics, which include labeling protestors as extremists and Canada’s unvaccinated men, women and children as “racists and misogynists.”

“When you separate people, it’s easy to create power through separation,” said Fleury. “But like I said, what we’re seeing in the country right now with these truckers, honestly it has ignited the whole entire country of Canada.”

“The thing about Canadians is that eventually our long, long fuse burns out, and that’s where we are in the country. Everybody wants change, and we definitely want to have an impact with this movement or revolution, whatever you want to call it. We want change to happen.”

Speaking from Calgary, Fleury observed how a vast majority of office buildings in the city have remained unoccupied as the region struggles to support an oil industry embattled partly due to Trudeau’s anti-energy policies.

“We went from this incredibly bustling, amazing place to people losing their jobs,” he said. “We’ve had a lockdown, we’ve had all these things. For me, I’ve played ten times for my country, and I put my jersey on and had the maple leaf on, and I know I was representing the people of Canada, and I can tell you that what is happening in the country right now it’s way bigger than that.”

The convoy has announced it will arrive in Ottawa on Saturday, though Ottawa Police have said that parts of it may reach the capital as early as tomorrow. The convoy protest was triggered by the Liberal government’s decision to reinstate a vaccine mandate for cross-border truck drivers although the movement has since broadened to include calls for an end to COVID restrictions throughout Canada.