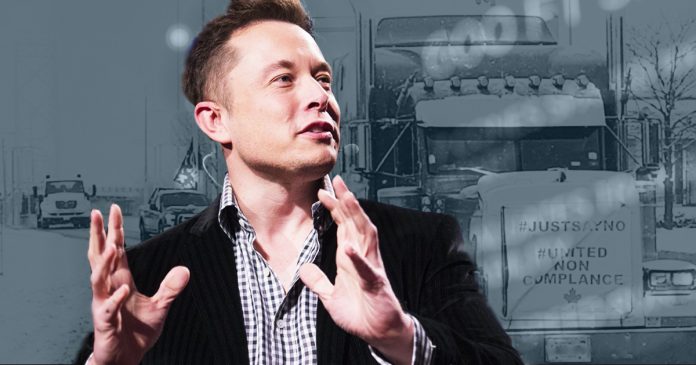 Prominent figures from around the world have voiced their support for the Truckers for Freedom Convoy heading to Ottawa to protest COVID-19 mandates and the erosion of freedoms under Prime Minister Justin Trudeau.

Numbered among them are business leaders, sports stars, politicians, academics and entertainers. Many of them have specifically called out Trudeau for claiming the convoy is made up of a “small fringe minority” holding “unacceptable views.”

Attempts by the legacy media to paint the truckers as so-called racists and extremists have fallen on deaf ears as the convoy gains international attention.

Tens of thousands of truckers are expected to arrive in the capital this weekend where supporters will continue to demonstrate against unconscionable government overreach. So far, a GoFundMe campaign has raised over $7 million in funds which will compensate truckers and go to various veterans groups.

CEO of SpaceX and Tesla Elon Musk tweeted in support of the convoy on Thursday, declaring,  “Canadian truckers rule.” In follow-up tweets, Musk decried government overreach and the erosion of freedoms, calling it “the path to tyranny.”

Donald Trump Jr. also voiced his support for the convoy in a Facebook video posted on Wednesday. Trump encouraged truckers to “push back against insanity,” saying the convoy was a “genius idea.”

Podcaster Joe Rogan highlighted the convoy’s efforts on a recent episode of The Joe Rogan Experience. Rogan showed clips of the convoy composed of “fifty thousand trucks … headed to Ottawa to protest the vaccine mandates by Trudeau.”

American comedian and actor Rob Schneider joined in on voicing his support of the convoy while also ridiculing Trudeau for going into quarantine after being exposed to COVID-19 despite being asymptomatic.

Renowned Canadian author and speaker Dr. Jordan B. Peterson was one of the early voices to back the freedom convoy. Peterson even accused Trudeau of lying and having a “nose as long as the trucker’s convoy” for saying the truckers hold unacceptable views.

On Thursday, UK actor and comedian Russell Brand published a short clip encouraging the truckers for “standing up to freedom.” In a longer YouTube podcast, Russel also blasted the legacy media’s lack of coverage of the movement.

Neuroscientist and author Dr. Debra Soh tweeted on Friday in support of the convoy, saying that Canadian truckers “will be the ones to end this sanity.” Soh also blasted the media for portraying the convoy as another Jan. 6 event.

Canadian hockey star and olympic gold medalist Theo Fleury took to Fox News to voice his support of the convoy, calling it a nationwide movement for freedom.

Canadian-born hockey star Mike Fisher posted a video on his Instagram to lend his support for truckers “fighting for the freedom of the country.

Canadian actress and Golden Globe Award winner Evangeline Lilly took to Instagram while at a protest in Washington DC in support of the Truckers for Freedom Convoy. Lilly spoke against forced vaccinations and the fear tactics used by politicians during the COVID-19 pandemic.

Canadian professional armwrestling legend and former Canadian Special Forces member Devon Larratt posted a photo to his Facebook on Thursday showing off a new tattoo honouring the truckers and declaring, “I love my country…Thank you to the truckers for being leaders to a ‘small minority.’ See you this Saturday.”