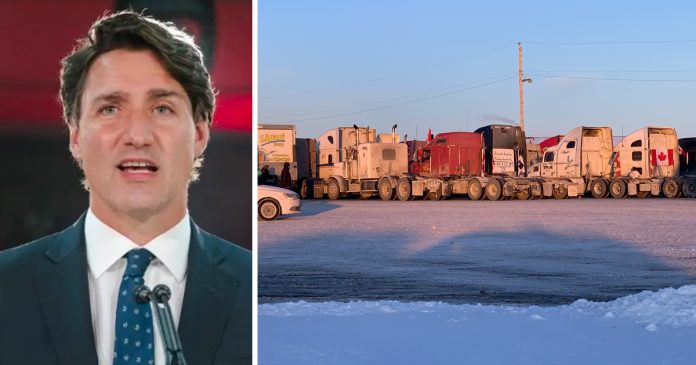 The trucker freedom convoy converging on Ottawa from different parts of the country is unlike anything Canada has witnessed in recent history.

In town after town, as the truckers make their way to the nation’s capital, they receive cheers and praises from the local populations. The scenes are staggering: hundreds gather, families included, in harsh winter conditions, often waiting hours for the convoy to show their support.

In normal times, this would be considered a beautiful show of Canadian solidarity, but according to prime minister Justin Trudeau, the convoy represents nothing but a “small fringe minority” holding “unacceptable views.”

When asked about the convoy on Wednesday, the prime minister observed, in classic Trudeauspeak, that the movement does “not represent the views of Canadians who have been there for each other” throughout the pandemic.

That is a rather surprising statement considering truckers have been on the frontline of the pandemic, delivering food and supplies for Canadians, even through the first wave when the virus appeared mysterious and far deadlier than it turned out to be.

Of course, Trudeau has developed over the years a simple strategy: to label anyone who disagrees with him or his liberal agenda a “racist,” “intolerant,” or, in this case, a “fringe minority” with “unacceptable views.”

The simple fact is that the spark that lit this whole protest came from the Trudeau government imposing a vaccine mandate for cross-border truckers. This policy disregarded the fact that trucking is a lonely job, with very few opportunities for social interaction, or that the vaccine does not prevent transmission of the virus, or even that the truckers, after being on the frontline for two years, deserve our respect and appreciation.

After all, Canada remains one of the most heavily locked-down jurisdictions in the world. As restrictions are being lifted in the United Kingdom and Europe, and as they have been nearly non-existent for most of the United States for months now, the restrictions are still commonplace throughout Trudeau’s Canada.

Is the virus more deadly in the true north strong and free? Or does Canada have a poor and tired healthcare system, incapable of handling surges of seasonal respiratory viruses? Or is this actually about the government enjoying governing us through conflicting and ever-changing decrees, emergency orders and mandates? These are the discussions that many Canadians cheering on the convoy are wanting to have. These are also the things our elites are nowhere near willing to discuss.

Along the road, as the convoy movement grew, it mutated into something more than a protest about mandates that harmed truckers and the supply chains. It became an opposition to all the authoritarian measures and poorly justified restrictions which have been plaguing the lives of Canadians for nearly two years now.

Yet the legacy media, just like Justin Trudeau, are having a very difficult time understanding the sacrifices that Canadians have made over those years. For privileged politicians, public sector workers and public personalities, the lockdowns and restrictions were just an excuse to spend some more time at home, to buy a Peloton bike, or a dog, or invest in a kitchen renovation.

But so many Canadians across the country, in small towns and big cities, have made sacrifices that extend far beyond that — none more than essential workers like truckers. And with no end in sight to the pandemic, the feeling of helplessness of these Canadians has morphed into the desire for political action, in the form of a convoy heading to Ottawa.

Our leaders and our elites should try to understand what this means rather than try to dismiss it with stale insults.

Marie Oakes is an independent commentator and co-host of the No Malarkey Show. She has been covering COVID protests in Canada for over a year. She can be followed on Twitter, Facebook, Instagram, Telegram, TikTok, and YouTube @TheMarieOakes