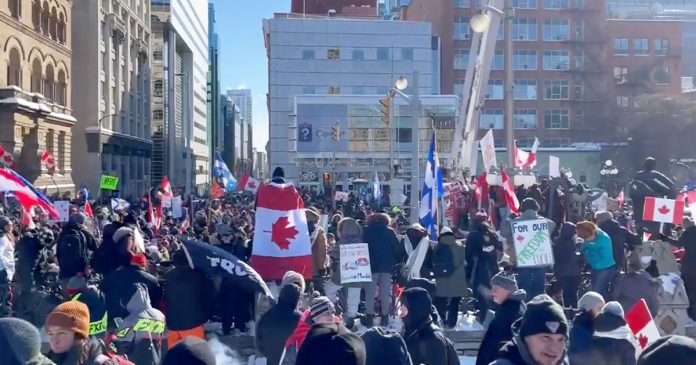 On Day 7 of the Truckers for Freedom Convoy, tens of thousands of people peacefully converged on Ottawa’s Parliament Hill, the legacy media’s hateful narrative crumbled and Canadians sent a message to the entire world – that vaccine mandates and restrictions under COVID must come to an end.

The legacy media’s predictions of violence and extremism were foiled today as tens of thousands of Canadians jubilantly gathered on Parliament Hill waving Canadian flags, dancing in the streets and celebrating the conclusion of a monumental convoy that united a nation and inspired similar movements around the world.

True North was on the ground to capture the scenes and speak with those who braved the cold weather to lend their voices to the truckers’ call for freedom.

This was what it looked like before the protest began early on Saturday.

Here is what some of those who gathered in Ottawa had to say about why they were there.

When asked about what brought him all the way out from Edmonton, one Albertan protestor told True North, “freedom – to be heard, to support and to hear the people sing.”

Many members of the legacy media reported that only “hundreds” of people were part of the trucker convoy, likely in an attempt to corroborate Prime Minister Justin Trudeau’s remarks on Wednesday that the truckers were part of a “small fringe minority.”

Aerial footage captures some of the scale and magnitude of that “small fringe minority” as it came together in full force today.

This footage from True North shows what it was like on the ground earlier today.

True North’s Andrew Lawton spoke to former Conservative Party leadership candidate Leslyn Lewis, who declared the protest today was “what democracy is all about.”

Lewis went on to say, “people believe that the government has overstepped with mandates, and they are here to exercise their democratic right.”

True North also caught up with People’s Party of Canada leader Maxime Bernier, who told Andrew Lawton that “the truckers are giving hope to thousands of Canadians.”

One patriotic trucker led a crowd outside Parliament in a singing of O Canada.

As of the time this article was published, no official reports of violence from the protest had been made.

Legacy media headlines throughout the week predicted that the trucker convoy was going to be Canada’s version of January 6th.

Much to the disappointment of those who had accused the convoy of being violent extremists, protestors were seen dancing, singing and peacefully waving their Canadian flags in an unprecedented showing of national pride and unity.

Here supporters can be seen dancing to the beat of a drum.

Crowds gathered around a group of indigenous singers.

Look at all those Canadian flags.

True North founder Candice Malcolm joined Neil Oliver on GB News today to discuss the convoy and what it has meant to Canada and the world.

“I’m so proud of my fellow Canadians,” Malcolm told Oliver. “After two long years of being complacent and going along with the rules, doing exactly what we were told to do, we are finally coming together, we’re standing up and we are demanding that our voice be heard.”

As the night came to end, crowds lit fireworks, and danced outside Parliament.

Joining in on the number of endorsements of the convoy by high profile figures was former US President Donald J. Trump. At his rally in Conroe, Texas, Trump said the truckers and its supporters were doing more for freedom than leaders in the US.

True North will continue to bring you coverage of the events in Ottawa.

The GoFundMe in support of the truckers at the time this article was published had reached $8,407,040.