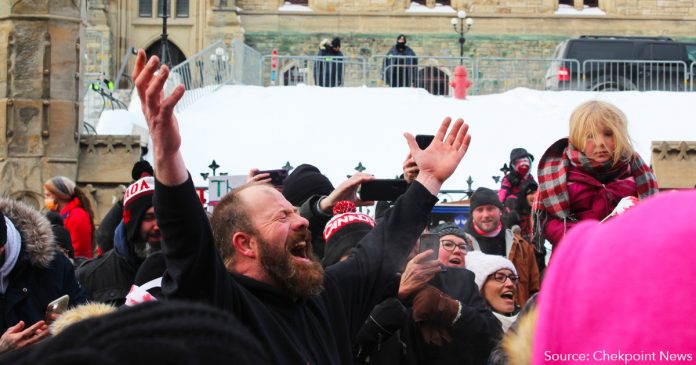 On Day 8 of the Truckers for Freedom Convoy, peaceful protesters returned to Parliament Hill on Sunday to pray and sing, even more truckers arrived in the nation’s capital and Justin Trudeau remained in hiding.

The day in Ottawa began with a religious service on Parliament Hill led by Pastor Henry Hildebrandt. It was attended by thousands of people.

The pastor from Aylmer, Ontario led the crowd in a unified singing of Amazing Grace.

In his sermon, the pastor said that the crowd that gathered in Ottawa yesterday and today “was the largest fringe minority” that he had ever seen.

Joining the sermon was a clan mother from Yellowknife, Northwest Territories who alongside the pastor offered her blessing to the thousands of people in attendance.

The elder thanked the protestors, saying, “that’s what this movement is about – one heart. And what does that mean? That means love, understanding, acceptance, tolerance – and when we have that, we will respect one another.”

After the service, the organizers of the Freedom Convoy’s GoFundMe, which has received more than $8.9 million in donations, held a press conference, speaking only to independent journalists including True North’s Andrew Lawton.

Asked by Keean Bexte about how long the protest in Ottawa would continue, organizer Benjamin Dichter said that the truckers would remain in Ottawa for as long as it takes.

Addressing distribution of the GoFundMe donations, organizer Tamara Lich told reporters that the funds would be used for fuel, food and lodging for truckers who would be continuing the protest.

Dichter stressed to the reporters that the organizers would not be taking any of the funds for themselves but that some truckers may be compensated for not being able to work due to the federal vaccine mandates.

The CBC and other legacy media outlets continued to push a hateful and negative narrative about the convoy and its supporters today.

The CBC emphasized the sighting of a Nazi flag at the protest on Saturday as an example of the “hateful” presence at the protest.

Instead of trying to identify the person with the flag, however, CBC resorted to interviews with “experts” to condemn the protest. One CBC video released today was titled, “Protest convoy had ‘worst display of Nazi propaganda in this country,’ anti-hate advocate says.”

True North wants to identify that person, and founder Candice Malcolm is offering up to $6500 to anyone who can help us find whoever was carrying that flag.

Alghabra answered, “no one should be surprised that there is work being done to get us there.”

New groups of truckers were spotted rolling into downtown Ottawa tonight where organizers have said they will remain until the federal government lifts the vaccine mandate on truckers.

Canada’s trucker convoy has inspired the world. In Australia, “truckies” began their ‘Convoy to Canberra’ in solidarity with their Canadian counterparts.

Here is the scene from down under.

As the night came to a close in Ottawa, protesters in the nation’s capital were seen celebrating and dancing in the -12°C temperatures.

True North will continue to bring you coverage of the protests throughout the week.

The GoFundMe in support of the truckers at the time this article was published had reached $8,957,450.