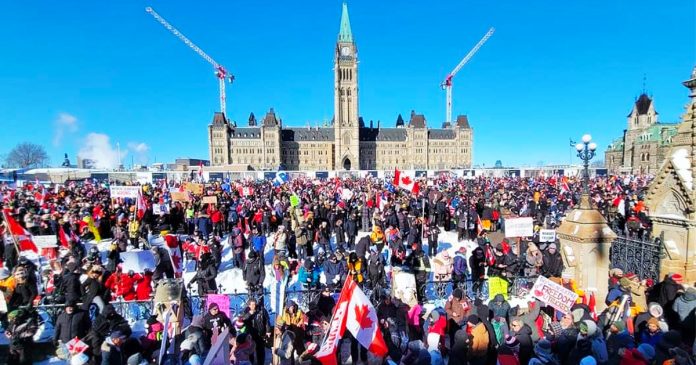 Canadian legacy media outlets have been spinning themselves in circles trying to discount and defame the massive Freedom Convoy protest.

First, they ignored the convoy altogether.

Then, they pretended the truckers were protesting bad road conditions.

Then, something amazing happened. The convoy took on a life of its own, grew beyond anything anyone could have predicted and inspired and united the nation.

In response, legacy media journos are doing their best to discredit, denigrate and delegitimize the truckers and their supporters.

Try as they may, however, Canadians – and the whole world watching from outside – can see through their malice.

These journalists have lost all credibility, and their desperate attempts to portray this movement as anything other than what it is – peaceful, positive, patriotic and proud – are falling flat.

Here is a quick round-up of some of the absolutely stupidest things said, alleged and reported by legacy media journalists this week about the Truckers for Freedom Convoy.

Without a shred of evidence, a CBC News anchor floated the possibility that “Russian actors” had instigated the convoy due to Canada’s support of Ukraine.

During an interview with Liberal public safety minister Marco Mendicino, the CBC journalist based her entire theory on unspecified concerns.

“Given Canada’s support of Ukraine in this current crisis with Russia, I don’t know if it is far-fetched to ask, but there is concern that Russian actors could be continuing to fuel things as this protest grows, perhaps even instigating it from the outside?” asked Nil Köksal.

In his caricature, de Adder portrayed a series of trucks all blazoned with the word “fascism,” attempting to demonize hardworking truckers and their supporters as enemies of their fellow Canadians.

Unfortunately for him, Canadians came out in droves to downvote the cartoon into oblivion, with over 11,000 commenters expressing their disgust at the portrayal.

To save face, de Adder claimed that he supported “all truckers” but did “not support this convoy.”

On Wednesday the capital-based news outlet Parliament Today released a report citing “national security expert” Jessica Davis, who falsely claimed that anyone donating to the convoy’s fundraiser could be found guilty of providing financial assistance to a terror group.

“(Davis) warns that those who have donated to groups in support of ongoing truck rallies could be found guilty under the Criminal Code, as they ‘directly or indirectly’ could provide financial services intended to carry out any terrorist ‘activity’ or benefit such a ‘group’,” tweeted the outlet.

After being challenged and shown that Davis had a bias against the truckers, the outlet quickly deleted the tweet without issuing a correction.

In an attempt to downsize the convoy’s scale, The Logic’s Ottawa reporter David Reevely took a misleading photo of an empty street and used it as proof that the protest was “medium-large by Ottawa standards.”

Reevely did not indicate when he took the photo.

Aerial footage of the protests shows massive gatherings of tens of thousands of people in the capital’s core and pouring out into nearby streets. Additionally, trucks at the tail end of the convoy continue to roll into Ottawa to join protests as rallies continue throughout the weekend.

Far-left reporter Justin Ling has repeatedly tried to smear the convoy as an extremist movement akin to the Jan. 6 US Capitol riots in Washington DC.

Ling claimed things in the capital were “getting out of hand” when he misheard the contents of a  police scanner report.

Shortly afterwards, Ling wrote a followup tweet admitting that what he thought was arson was actually “a small bonfire” lit by families and other revelers.

On Thursday, CBC Toronto journalist Dale Manucdoc falsely attributed hateful text messages he had received to a “Toronto contact” for the trucker’s convoy after he had allegedly asked for an interview with organizers.

Manucdoc was forced to issue a clarification later the same day, however, admitting that the “texts came from a different number than the contact number” and that whoever texted the messages “did not identify themselves.”

CTV National News journalist Mackenzie Gray used a single photo of one hooded individual carrying a confederate flag in Ottawa to paint the convoy as a potentially racist movement.

Gray’s insinuation was quickly challenged by others, including Florida Gov. Ron Desantis’ press secretary Christina Pushaw. Pushaw accused Gray of tweeting the photo with “no context” and that it appeared that he was “implying the entire convoy are racists.”

The use of far-left “anti-hate” activists as experts has been common in the legacy media’s ongoing attempts to tarnish the convoy’s image.

A recent article by CTV News cited little-known Canadian Anti-Hate Network activist Peter Smith as a credible “expert” source regarding the alleged extremism of the convoy and its supporters.

The Canadian Anti-Hate Network has frequently shared and promoted the work of the violent far-left group Antifa.

Global News reporters who attempted to discredit the convoy by comparing it to the Jan. 6 US Capitol riots have gone on the defensive since their comparisons have been criticized for lack of substance.

Instead of responding to these criticisms, however, their outlets have doubled down – alleging a colleague of theirs was called a communist and insisting they had evidence that “extremists are trying to take over” the convoy. Of course, no credible evidence was provided.

The Globe and Mail published a misleading article suggesting the Sikh community had not been invited to join the Truckers for Freedom Convoy.

A tremendous amount of evidence proves otherwise, both on social media and on the ground. Many members from the Sikh community, including drivers, participated in the convoy and were present in Ottawa on Saturday.

Other attempts to delegitimize the protests include claims that the trucking industry does not support the convoy. A recent CTV News article relied on the comment of one trucker from London, Ontario to say that the convoy was “an embarrassment for the industry.”

The thousands of truckers who participated in the convoy say otherwise. Additionally, the article relied on two industry organizations, both of which were once advocating to repeal the Liberal vaccine mandate which sparked the convoy in the first place.

Only a week ago Mike Millian from the Private Motor Truck Council of Canada was saying that the mandate caused “mass confusion” in the sector and that Liberal flip-flopping has placed truck drivers’ lives into upheaval. Similarly, the Canadian Trucking Alliance was warning how the mandate would have “a negative impact” and that it would throw the supply chain into disarray.

Both groups have since changed their messaging to suit the official media narrative instead of throwing their support behind their fellow truckers. Despite being abandoned by these organizations, the trucking convoy continues to grow and support for its message has reached an international audience.