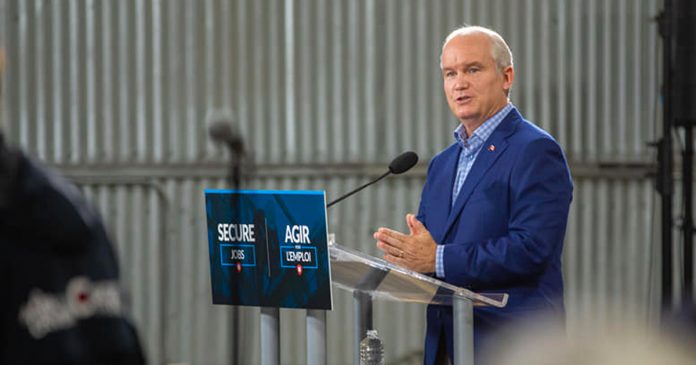 Enough Conservative Members of Parliament have signed a letter calling for a review of Erin O’Toole’s leadership that he may have to face a vote in caucus as early as Wednesday, according to a report in the Globe and Mail.

The story, published Monday evening, said that 35 Conservative MPs have signalled their desire for a vote in a letter to the party’s caucus chair, Scott Reid.

Under the Reform Act, caucus members can trigger a review vote if 20% of them provide written notice. With 119 Conservative MPs, 35 is more than enough to force a vote.

The Globe report cites unnamed sources claiming that 63 MPs – more than half – are willing to oust O’Toole in a caucus vote, though it also cited another source claiming O’Toole had the support of the majority of his caucus.

“Mr. O’Toole campaigned in the leadership contest as a principled conservative voice that would unite the party,” Benzen wrote. “However, since Mr. O’Toole assumed the position of Leader, there have been numerous instances of flip-flops and questionable judgements on Mr. O’Toole’s part.”

Benzen cited the “adoption of a de-facto carbon tax,” the requirement that Conservative caucus members support the entirety of the platform, and the failure to stand up for English language rights in Quebec as some of O’Toole’s short-comings. He also called out O’Toole’s performance as opposition leader during the Covid-19 pandemic.

“Failure to clearly stand up for the Charter rights of Canadians during the pandemic,” Benzen included in his list.

Benzen said the caucus has given O’Toole “more than enough chances for a course correction,” but concluded a caucus review was the only way forward.

Last week, O’Toole floundered when asked repeatedly whether he supported the Truckers for Freedom Convoy as it made its way towards the nation’s capital. It was only after numerous Conservative MPs, including deputy leader Candice Bergen, issued statements of support for the convoy, that O’Toole backed the convoy and vowed to meet with truckers.