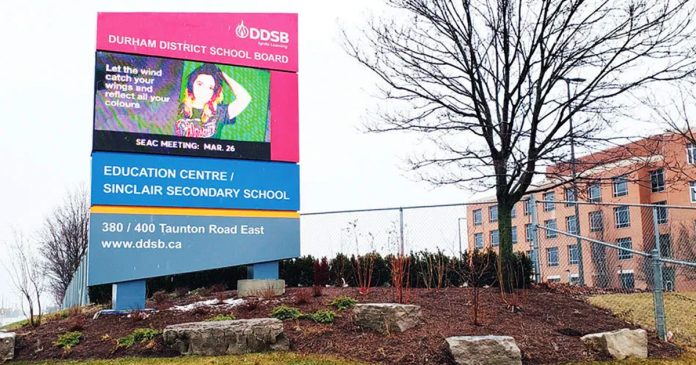 A Durham District school board (DDSB) trustee began Monday night’s meeting by stepping down as chair of the governance committee, claiming her colleagues had tried to cancel her for passionately defending free speech at the prior meeting.

“My voice is no longer welcome or wanted, and I no longer feel safe on this committee,” Linda Stone said. “I will be stepping down and leaving the meeting and I hope the irony of this is not lost on people.”

Stone intimated that she’d received pushback after questioning some elements of the board’s proposed new human rights policy at a meeting on Jan. 24. She had cautioned that the policy should not be used to silence critics as the Waterloo Region District School Board (WRDSB) had done over the last few weeks.

“When anyone has a differing opinion … or merely would like certain terms defined, will they, as I was, be told that their questions and comments are offensive and harmful,” she had said.

“If our students and staff and anyone listening are not strong enough, resilient enough and are hurt and offended when someone might not agree with them, then we have a very big problem.”

In addition to fostering the use of preferred pronouns, it recommends teaching students narratives that discuss the impacts of colonialism, oppression and systemic discrimination.

Perhaps the most contentious is the policy’s definition of “white supremacy.” The definition seems to come right out of the Critical Race Theory playbook, and does not strictly refer to people who use white skin colour as a basis for hatred.

According to the policy, white supremacy is “a racist ideology based on the belief that white identity is the norm, standard and ideal. It does not refer to extreme hate groups or far right extremists … it is about the accumulation of social, cultural and institutional power that has and continues to advantage a group of people. It refers to the pervasiveness, magnitude and normalcy of white privilege, dominance and assumed superiority in society.”

Stone had said that students and staff might want to consider engaging in dialogue with those who disagree with them instead of saying they’re offended or hurt.

“Try seeing things from another point of view,” she said. “Are we teaching our students to be intolerant of other points of view?”

“The attack on free speech is a universal tactic of intolerant groups who wish to only have their beliefs heard,” she said. “Fall in line with the orthodox way of thinking or you will be cancelled, chastised … fired and have ad hominems thrown at you.”

Stone said they need to look no further than what happened at the WRDSB who silenced a teacher of 20+ years for voicing her concerns around books she thought were too sexually explict for young students.

At that point Stone was interrupted by the board’s vice-chair Patricia Barnes, the only non-white trustee on the board. Another trustee, Darlene Forbes, twisted her scarf angrily as she tried to stop Stone.

“Is this where we want to go?” Forbes said, waving her hands. “I’m quite concerned about the direction this is going.”

It was clear that all of this common sense was just far too much for the majority of the 11 trustees, who’d swallowed the Woke Party Line and were determined to stick to it.

Satisfied they had purged the lone dissenter, the DDSB quickly elected a new chair, Michael Barrett, who – judging by his tweets – marches to the same woke drum beat as they do.

Another trustee, Paul Crawford, who’d spoken out against the white supremacy definition at the Jan. 24 meeting, was nowhere to be seen at Monday night’s meeting.