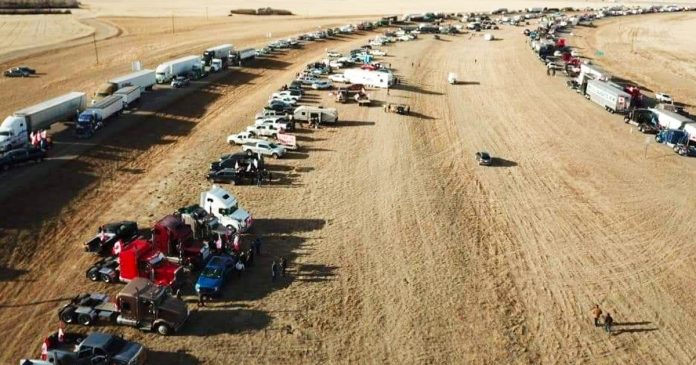 On Day 10 of the Truckers for Freedom Convoy, coverage swung westward again as negotiations between the RCMP and the truckers blockading the Canada-US border in Coutts, Alberta broke down. Police retreated, farmers joined in to strengthen the blockade and Jason Kenney spoke out against the truckers.

Negotiations in Coutts between the truckers and law enforcement collapsed today as the protestors were given a grace period either to leave peacefully or be arrested.

Last night, reports emerged from those on the scene that the RCMP were not allowing food and other resources to reach the truckers blockading the border.

Furthermore, a special operations unit was dispatched to the border yesterday to back up the RCMP.

This video was recorded yesterday from inside the blockade in Coutts.

One eye-witness who spoke with the RCMP in Milk River, Alberta can be heard saying that the RCMP weren’t allowing “anyone through, not even for food.”

This was the scene as the RCMP arrived at the blockade yesterday.

The RCMP tried to establish a barricade to keep other truckers and protesters from joining the ongoing protest in Coutts. That didn’t stop supporters from around the province who made their way to Coutts by rolling right through the RCMP barricades to join their fellow countrymen and provide more support to their ongoing protest for freedom.

Here, farmers in tractors and pickups can be seen breaking through the police barricades.

In defiance of multiple requests from the RCMP and the Alberta government to back down, truckers at the border bravely held the line today.

In this video, truckers chanted, “freedom.”

The same truckers linked arms to hold the line.

After days of defensive maneuvering to maintain their ongoing protest, the truckers began to push back peacefully against the Mounties who had been sent in to remove them.

Here truckers can be seen walking toward the RCMP line and forcing the Mounties to retreat from their position.

Speaking to True North’s Andrew Lawton at a press conference today, Premier Jason Kenney told the protestors to “channel their frustrations into peaceful and lawful protest” after describing their blockade as “unlawful.”

Kenney reminded those that disagree with the vaccine mandate for cross-border truckers that he hears them and that he agrees with them.

He went on to say that it was unfortunate to see a small number of people in the protest embrace “extreme views” and “hateful symbols.”

“We’re here fighting for the freedoms of not us, but for our kids, our grandkids and the future of this country.”

Things were relatively quiet in Ottawa, as trucks and protesters continued to stand their ground.

Truckers provided meals to the homeless and even had pop-up pizza ovens to provide pizzas for everyone.

And it wouldn’t be a Canadian protest without hockey – truckers took part in a friendly game of road hockey in downtown Ottawa.

True North will continue to bring you daily coverage of the ongoing protests across Canada.

The GoFundMe in support of the truckers at the time this article was published had reached $9,915,830.