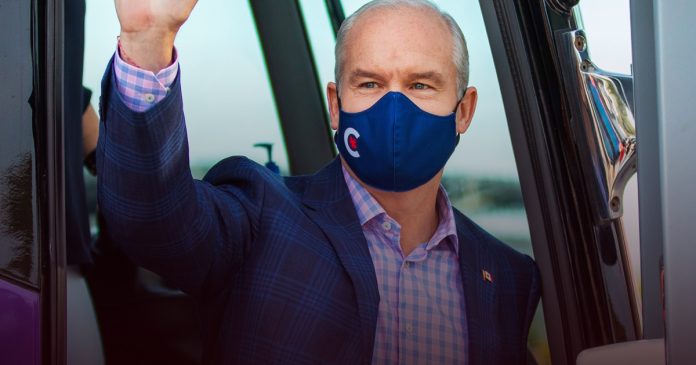 The messages coming from O’Toole and his office in response are incorrect, divisive and reinforce the reason why so many Conservatives want a new leader, senior Conservative sources tell True North.

“O’Toole and his team want to paint this as a Red vs. Blue civil war. It isn’t. There is a broad spectrum of opinions and perspectives in (the Conservative) caucus who signed that letter,” one Conservative MP told True North.

“There are MPs who agree with O’Toole on principle that the party needs to moderate – Red Tories – who signed the letter.”

“This is not an Andrew Scheer-led movement, it isn’t a so-con movement. The movement to remove Erin O’Toole as leader is as diverse as the Conservative Party itself,” another Conservative MP told True North.

True North has spoken to nine senior Conservative sources – including three sitting MPs – for this story. We have decided to protect the identities of these sources so they would speak more freely.

“We are trying to get things done, and my name getting out there could derail this,” said one of the MPs who spearheaded the initiative to remove O’Toole as leader.

This MP, who described himself as enemy number one for O’Toole and his office, said that O’Toole’s office is pressuring MPs to sign loyalty pledges. “MPs are feeling intimidated to sign the letter,” he said, noting that some are signing it even though they plan to vote against O’Toole on Wednesday.

“The witch hunt has begun,” he said.

True North asked the MPs and senior sources why O’Toole is facing this challenge now.

“We need someone who can unite the party, engage Canadians and win,” said an MP. “What O’Toole is doing is not working, his popularity is plummeting and his 4th quarter 2021 fundraising are the worst numbers in our party’s history.”

“This is very bad. It’s the worst Q4 since the Conservative Party of Canada was founded. With inflation, it’s the worst quarter ever.”

“O’Toole is unpopular and losing, and trying to counteract his own freefall by blaming everyone around him,” said an MP.

“This isn’t about policy. It isn’t even about him moving the party in the wrong direction. This is about trust and integrity. O’Toole has lost those things,” said a long-time MP who supported O’Toole in the 2020 party leadership race.

He told True North that the initiative to remove O’Toole came together “very quickly” over the course of this past weekend, and that it was in response to an indication that O’Toole was planning to demand a public showing of loyalty and that his leadership style was dividing the party.

The MP believes the fact that they were able to find 35 MPs to sign the letter – more than 30% of caucus – in just one weekend shows the demand for change.

A third MP, who is a public supporter of O’Toole and backed him up until very recently, echoed these concerns, saying that the recent caucus retreat was “demoralizing” as well as “heated and ugly.”

“He is charming, I like him, but his messaging and his style and his mistakes this month (January) did him in… he’s going to get shellacked on Wednesday.”

The straw that broke the camel’s back

Stubbs expressed mild criticism over O’Toole performance in the 2021 election and said she supported a leadership review. In response, which MPs say was retribution for her lack of loyalty, O’Toole asked the House of Commons to investigate Stubbs for allegedly creating a toxic work environment for her staff.

“That was petty and disappointing,” a source told True North.

Both CBC and Global News quoted a “senior source” in O’Toole’s office saying the 35 MPs represent the “far right of the party,” referring to them as “the Conversion Crew.”

CBC reported that MP Garnett Genuis is “spearheading the coup.”

This is not true, according to the three MPs True North spoke to. “Garnett didn’t initiate this.”

Genuis released his own statement defending himself and calling Erin O’Toole a liar.

It’s hard to see O’Toole overcome this kind of public infighting in his caucus, a source said about the spat.

Mixed messaging on the Trucker Convoy

Given the timing of this letter, True North asked the MPs and sources if O’Toole’s lack of support towards the truckers contributed to the letter.

“These concerns were well established before,” said the MP who is helping lead the charge on this. “But his lack of convictions and inability to connect  publicly manifested with the truckers.”

“We saw his own deputy leader (Candice Bergen) taking a stronger, clearer stance than O’Toole,” said a source. “That’s not good for a party leader, especially one who wanted to grow the conservative support base and connect with traditional NDP/labour voters.”

He needs to accept this and move on

After news broke on Monday evening of the 35 caucus members supporting a leadership vote, O’Toole put out a statement pledging to fight for his job.

“I’m not going anywhere and I’m not turning back,” he wrote.

“It’s time for a reckoning. To settle this in caucus. Right here. Right now. Once and for all. Anger vs. Optimism. That is the choice in simple terms.”

The MPs who spoke to True North were not happy about his response.

“He sounds like Justin Trudeau, trying to divide Canadians and telling us that the views he disagrees with are angry, negative and extreme. He believes that if you disagree with him, you are unacceptable,” said one MP.

“After last night, after that statement he released, there are probably more than 63 MPs who are going to vote against him,” said another MP. “We need to remove him to save our party and our movement.”

“Canadians are desperate for some leadership, we need a leader who can pull our country together and show a different path,” said the MP who helped organize the letter.

“We so desperately want a leader. O’Toole is a follower, he has no deep convictions other than whatever the polls say. We’re not going to win with him.”