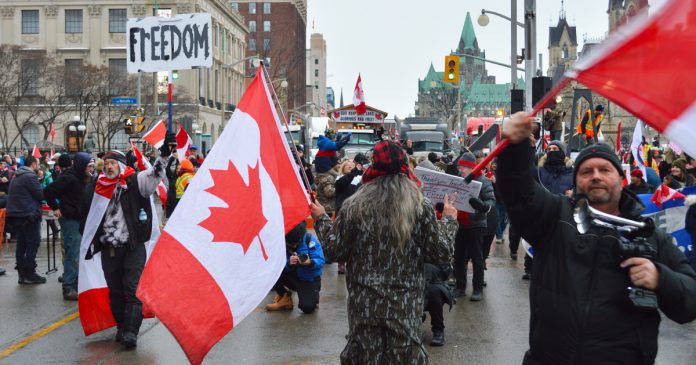 The Justice Centre for Constitutional Freedoms (JCCF) is now representing the Freedom Convoy organizers and has a team of lawyers on the ground in Ottawa to provide legal assistance.

According to one of the organizers of the convoy’s GoFundMe Tamara Lich, accountants and lawyers working for the convoy have been communicating with GoFundMe, who said it stopped the truck convoy’s crowdfunding page on Wednesday “to ensure it complies with (their) terms of service and applicable laws and regulations.”

Lich said they are hoping to have the recent suspension on their account lifted soon.

Wilson said that most of the money is being held by GoFundMe because they were “bombarded with an orchestrated social media campaign to try and shut it down.” He said that all of the legal and accounting requirements have been met.

“Once we reach the point where GoFundMe has released the funds, the corporate lawyer experts on the team as well as the accountants are currently refining the process for truckers and others who have been involved with the convoy to be reimbursed,” said Wilson.

The funds raised by the GofundMe at the time of the suspension had reached almost $10.1 million.

“I want to thank all Canadians from the bottom of my heart for our quest to restore our freedoms,” Lich said.

Lich had begun the press conference by reiterating the purpose of the freedom convoy.

“We are calling on all levels of government in Canada to end all COVID mandates and restrictions,” said convoy co-organizer Tamara Lich. “We will continue our protest until we see a clear plan for their elimination.”

Lich said that so far, no one from the Canadian, Ontario or Ottawa governments has spoken with them.  She said that the governments are instead using the media to portray the truckers as “racists, misogynists and even terrorists.”

Lich said that as a Métis woman, she is offended by these allegations. She added that the truckers are “average, peace-loving and law-abiding citizens from all walks of life who are fed up with being disrespected and bullied by our government.”

The protest entered its twelfth day on Thursday.

The scene on the ground was peaceful on the eleventh day, with protestors singing and dancing for most of the day while free food and coffee was served up at every block on the closed stretch of Wellington Street.