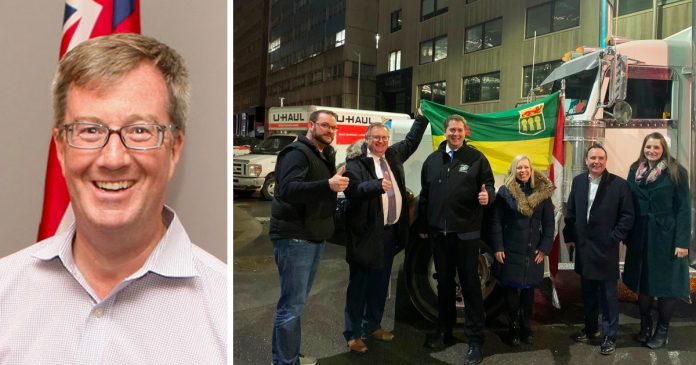 Ottawa mayor Jim Watson wants a group of Conservative politicians who met with some of the truckers parked outside Parliament Hill to say they’re sorry.

“This is an absolute disgrace that you would come out & praise this illegal action that has caused stress and hardship to residents who have been putting up with horns blasting throughout the night and residents harassed for wearing a mask & businesses forced to close,” said Watson in a tweet on Wednesday. “Apologize.”

Watson’s comments came after Conservative Party of Canada (CPC) Member of Parliament Kevin Waugh posted photos of himself and some of his colleagues at the Freedom Convoy protest site.

Waugh had described his meeting with the truckers in a wholly positive way, saying “(a) few of our SK Caucus members went to show our appreciation for the hardworking, patriotic truckers who have kept our supply chains healthy & grocery shelves stocked for the past two years. It’s great to see Canadians championing freedom on Parliament Hill.”

The other CPC members who posed in the photos with Waugh were Senator Denise Batters and former leader Andrew Scheer, along with MPs Rosemarie Falk and Fraser Tolmie.

Ottawa Police warned they might have to call in the Canadian military to break up the trucker convoy amid growing tensions between protestors opposing COVID-19 restrictions and downtown residents.

Ottawa Police chief Peter Sloly said that police officers did not have the resources to remove the trucks blocking the streets in Ottawa, adding the city is looking for help. However, Sloly added that bringing in the military carried a “massive risk” because officers were aware of the presence of weapons, including the actual trucks.

“We do not want riots, but all options remain on the table,” Sloly said.

Sloly’s remarks were amped up by former Ottawa Police chief Charles Bordeleau, who told CTV on Wednesday that it’s “not appropriate” for political leaders to “influence and support this type of criminal and illegal behaviour”…it’s putting “fuel on the fire.”

The trucker convoy entered its twelfth day on Thursday. The protest has remained peaceful, with people singing and dancing for most of the day while serving up free food and coffee on every block along the closed stretch of Wellington Street.