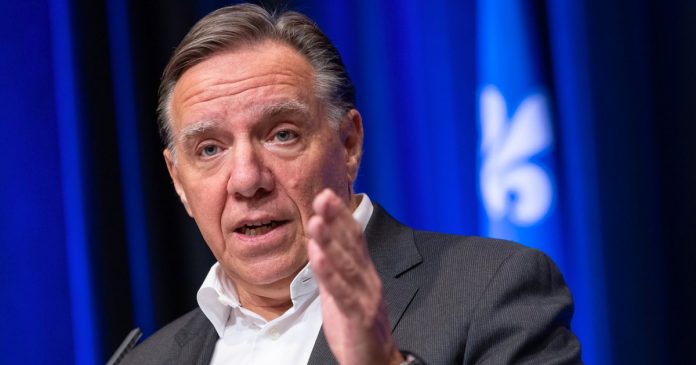 Quebec Premier François Legault said on Tuesday that he is open to meeting with organizers of a provincial freedom convoy now making its way to Quebec City.

Legault made the comments at a press conference on Tuesday, where he also announced that his government would abandon its controversial plan to tax the unvaccinated.

“I am always available to meet people who are in good faith to try to see how we can help them answer their questions, their concerns,” said Legault in French.

Like the Freedom Convoy in Ottawa, organizers of the Quebec provincial convoy are calling for an end to all COVID-19 restrictions and mandates.

Convoy organizers are envisioning a family-friendly protest, with stuffed animals, inflatable toys and opportunities for children to have their pictures taken in a truck.

However, there are concerns from Quebec City’s hospitality industry over the protest, as the event coincides with the start of the world famous Quebec Winter Carnival. Those festivities begin tomorrow and will last until Feb 13.

Quebec currently has some of the strictest COVID restrictions and vaccine mandates in the world. Despite having one of the highest vaccination rates in the world, businesses like gyms, spas, and bars are currently shut down as per government lockdown orders.

A strict police-enforced curfew from 10pm to 5am was also imposed earlier this year, but Legault opted to lift it early amid widespread backlash.

Unvaccinated Quebecers are banned from almost all “non-essential” activities as well as places of worship, government-run stores that sell alcohol & cannabis and big box stores including Walmart and Costco.

In agreeing to meet with the convoy organizers, Legault shows a marked contrast with Prime Minister Justin Trudeau, who once again on Thursday ruled out meeting with protesters in Ottawa.

In fact, Trudeau has spent the last week demonizing the peaceful truckers and their supporters who  have made their way to the nation’s capital to demand governments restore their freedoms.

Before they had even arrived in Ottawa, Trudeau had referred to convoy protesters as a “fringe minority” that holds “unacceptable views.” During a press conference on Monday, Trudeau doubled down repeatedly, calling them “tin foil hats” using “hateful rhetoric” and “racist imagery.”

Despite Trudeau’s animosity towards the protesters, a new Angus Reid poll found the majority of Canadians now support the lifting of all COVID-19 restrictions.

More protests against restrictions and mandates are expected this weekend across Canada, with those organizing them saying they will not stop until all COVID-19 measures are lifted.