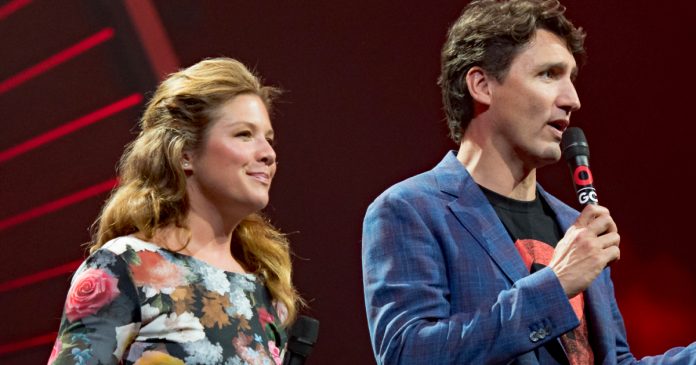 Prime Minister Justin Trudeau has recused himself from dealing with the Canadian Mental Health Association (CMHA) –  a lobby group that has received millions of dollars from his government – after the organization appointed his wife Sophie as a “national volunteer.”

According to Blacklock’s Reporter, Trudeau made the decision Wednesday, which was reported in a Public Declaration by the Ethics Commissioner Mario Dion.

In 2021, the CMHA received $1,946,003 in funding from the federal government as well as an additional $2.4 million that went towards local chapters throughout the country.

“The Commissioner and I have agreed a conflict of interest screen is an appropriate measure to prevent an opportunity while exercising my official powers, duties and functions to further the private interests of my spouse Sophie Grégoire Trudeau,” wrote Trudeau.

“I am neither to be made aware of nor a participant in any discussion or decision-making process pertaining to the private interests of my spouse or matters related specifically to the Mental Health Association itself unless the interest is in a decision or matter that is of general application. My cabinet and ministerial staff have been informed in writing of this conflict of interest screen.”

CMHA spokesperson Katherine Janson has stated that Sophie Gregoire Trudeau will remain in the position throughout the year.

Trudeau has run afoul of ethics laws on at least two occasions in the past. In 2017, he was found to have broken the Conflict of Interest Act after accepting a paid trip by close family friend the Aga Khan and not recusing himself from a conversation on federal matters.

Trudeau was found to have broken the act again in 2019 after attempting to pressure former attorney general Jody Wilson-Raybould to intervene in a criminal prosecution of SNC-Lavalin executives.

Most recently, the Conservatives accused theTrudeau of another conflict of interest after he approved a $43.5 million federal grant for We Charity in 2020. Several members of Trudeau’s family, including his wife Sophie, were found to have received free travel and other compensation from the charity for numerous speaking engagements.

A subsequent report found that although Trudeau did not break any laws, the decision to award the organization the funding had the “appearance” of a conflict of interest.