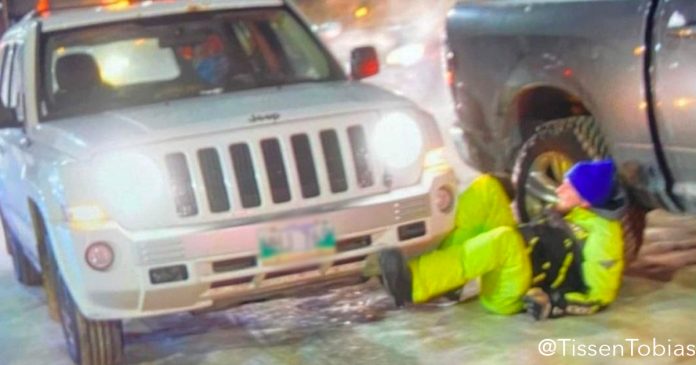 Videos circulating on social media show an unidentified individual ramming an SUV into protesters in Winnipeg, Manitoba on late friday night at around 9:10 PM CT.

Winnipeg Police held a press conference at noon on Saturday to provide details on the hit-and-run.

Photos and a video clip show a masked individual driving a white Jeep through a crowd of people. At least one individual was struck. According to police none of the victims sustained life-altering injuries and were treated in the hospital.

Police apprehended a lone male suspect about an hour after the attack. The suspect was arrested after a brief struggle.

According to Winnipeg Police Constable Rob Carver, the suspect is being charged with assault with a weapon times four,  dangerous operation of a conveyance causing bodily harm times two, dangerous operation of a conveyance, failure to stop after accident knowing that the driver was reckless times two and failing to stop at the scene of an accident times two.

Police say the hit-and-run is currently under investigation. According to protest organizers, four people were hit and rushed to the hospital while the driver of the vehicle was taken into custody.

Protests in support of the Trucker for Freedom Convoy are planned throughout the weekend in Winnipeg and several other major cities.

Parallel demonstrations are being held in Ottawa, Toronto, Victoria and elsewhere.

Prior reports by Winnipeg Police Chief Danny Smyth described the protests as cooperative and peaceful.

Law enforcement has reduced traffic on Broadway to one lane where the attack took place.

This is a developing story that will be updated when more information is available.