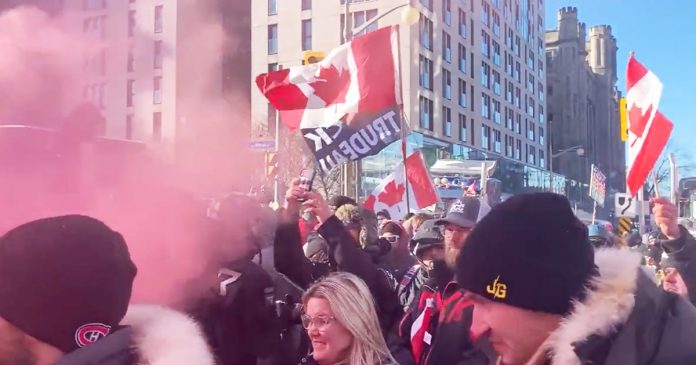 As the trucker convoy protests officially entered their second week, large crowds returned to Parliament Hill, thousands more Canadians peacefully protested in cities across the country, Pierre Poilievre announced he was running for the Conservative Party of Canada (CPC) leadership and protesters in Ottawa were asked if they had seen any of the acts of violence they were being constantly accused of.

Protests against vaccine mandates and other COVID restrictions swept the nation today as huge crowds gathered in Victoria, Edmonton, Toronto, Quebec City and many other cities from coast to coast.

In Coutts, Alberta, hundreds of riders on horseback flying Canadian and Albertan flags showed their support for the blockade and for freedom.

This was the scene in Ottawa today.

In Toronto, they were dancing too.

This aerial footage captured by CP24 shows the size of the gathering in Toronto.

This is what it looked like in Victoria, B.C. today outside the legislature.

#FreedomConvoyCanada2022 has assembled in front of the BC Legislature in Victoria.

In downtown Vancouver, supporters of freedom lined the streets, beat drums and had a good time.

This is downtown Vancouver right now. #FreedomConvoyCanada2022 supporters line the streets, beating drums and having a good time. pic.twitter.com/JaPqGcMdX0

In Winnipeg, protestors gathered outside the provincial legislature to have their voices heard.

Protest in support of #FreedomConvoyCanada2022 and removing COVID-19 mandates underway in Winnipeg, Manitoba as well.

Looks cold but quite the crowd gathered in front of the Legislative Assembly. pic.twitter.com/BfiuppFtZf

In Edmonton, this was the scene.

These are the scenes coming out of Edmonton right now as the #FreedomConvoyCanada2022 makes its way to the Alberta Legislature joined by farm tractors.

Pride flag spotted as protestors line the downtown core cheering on the truckers while horns are blaring. pic.twitter.com/2GrPVg73IB

Clips coming out of Quebec City on social media this afternoon. Large crowd assembled in front of the National Assembly to oppose COVID-19 mandates. High spirits and chanting.

I have never seen anything like this. This is happening across Canada. pic.twitter.com/X3mvLy8MTS

Here, a DJ set up a table in Calgary as protestors gathered to voice their opposition to vaccine mandates and other restrictions.

Similar happenings in downtown Calgary, Alberta today including a DJ and a full-out dance party.

Protestors are out in support of the #FreedomConvoy2022 and are calling for an end to COVID-19 mandates and restrictions. pic.twitter.com/FOUmcMycRO

In Ottawa, Carleton MP Pierre Poilievre announced his much-anticipated bid for the CPC leadership. An vociferous critic of Prime Minister Justin Trudeau and outspoken supporter of the Freedom Convoy, Poilievre was subsequently endorsed by numerous members of his caucus.

“Freedom from the invisible thief of inflation,” Poilievre promised. “Freedom to raise your kids with your values. Freedom to make your own health and vaccine choices. Freedom to speak without fear and freedom to worship God in your own way.”

Back in Ottawa, an emergency meeting of the city’s police board continued to refer to the freedom protest in terms of a violent occupation, with members calling for an injunction and the truckers to be removed.

True North asked some of the protestors if they had seen any violence, but not one could show us evidence or tell us about any incidents of violence that they had seen.

After cancelling the Freedom Convoy’s GoFundMe and withholding more than $9 million in donations from the organizers yesterday, the funding platform agreed under pressure to return the money to its donors without requiring them to fill out a form.

Meanwhile the Givesendgo fundraising campaign for the Freedom Convoy at the time this article was published had reached $1,594,664.

That’s within 24 hours of the campaign’s launch, and with the website constantly being overloaded by demand.