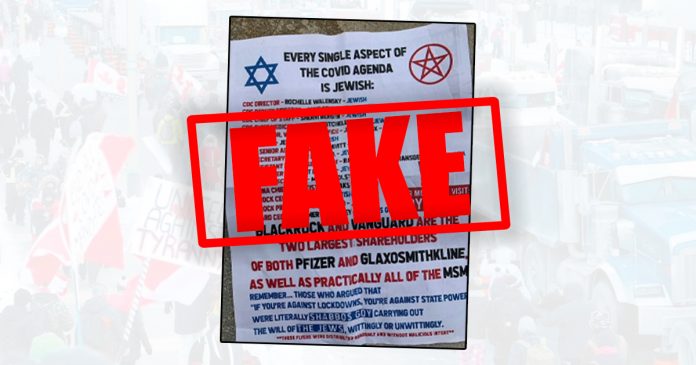 A report of an anti-Semitic document supposedly found at the Freedom Convoy in Ottawa has been debunked as a hoax, despite being pushed by legacy media and politicians as fact.

In a now-deleted tweet, Canadian Anti-Hate Network (CAHN) chair Bernie Farber posted a photo of an anti-Semitic flyer he claimed “a friend” had found at the site of the Ottawa freedom protests.

“Taken by a friend in Ottawa at the Occupation,” said Farber in a since-deleted tweet on Sunday. “Apparently in plain sight.”

Quillette associate editor Jonathan Kay debunked the flyer, however, pointing out the photo was identical to one from the US.

“Wow Bernie, isn’t it incredible that the picture your ‘friend in Ottawa at the Occupation’ sent you is identical to the photo posted on Twitter two weeks ago by someone in Miami, right down to the ceramic design in the background?” said Kay in a tweet.

Farber tried to justify his previous tweet, saying a friend saw a similar flyer at the protest.

“The photo itself was old and originally from Miami,” he said. “However, they said they saw the same thing.”

Kay compiled a list of various legacy media journalists and left-wing politicians who had fallen for the hoax by chiming in to voice their displeasure.

CTV News anchor Angie Seth tweeted about the leaflet, calling it “both disgusting and horrifying.”

“There is no white supremacy that doesn’t start with anti-Semitism and anti-Blackness,” said Ifill.

Toronto city councillor Joe Cressy said the flyer has no place in Canada, saying  “people need to “call it out, condemn it, don’t associate with it and shut this type of hatred down.”

“Don’t look away,” said Cressy. “This vile anti-Semitic hate is being distributed in plain sight.”

“The #ottawaoccupation gang came to Ottawa with swastikas scrawled on Canadian flags,” said Angus. “This shit isn’t hidden, it’s right there in the open.”

Rebel News reported in 2020 that the Canadian government gave the CAHN $268,400 in funding for a project called Containing and Countering Hate Groups.

This project, said the Ministry of Canadian Heritage, would help CAHN fight online hate “by hiring four team members to carry out the monitoring of extreme-right groups, report on their activities and file complaints with law enforcement.”