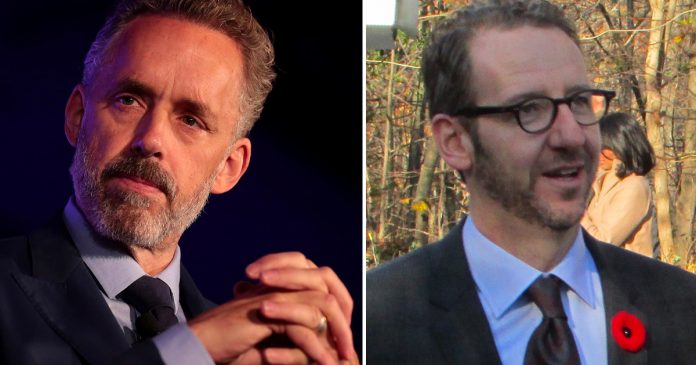 Acclaimed author and psychologist Dr. Jordan B. Peterson and Trudeau crony Gerald Butts engaged in a battle of threats Sunday on Twitter after Butts made unsubstantiated claims about the Conservative Party of Canada (CPC).

Prime Minister Justin Trudeau’s former principal secretary Gerald Butts began the duel by indulging in a bit of misinformation, accusing the so-called “MAGA wing” of the Conservative Party of being “funded from abroad” and that they “staged a hostile takeover” against former CPC leader Erin O’Toole. MAGA – “Make America Great Again”  – refers to the campaign slogan of former US president Donald J. Trump.

Like his former boss, Butts has been a vitriolic critic of the Freedom Convoy since before it arrived in Ottawa, alleging its connections to far-right groups.

Butts provided no evidence to support his allegation that the CPC was being funded from abroad, nor was he able to legitimize his claim that the CPC has a “MAGA wing.” Contrary to Butts’s remarks about O’Toole being voted out as CPC leader, CPC MPs including Garnett Genius have made it clear that O’Toole’s ouster was non-ideological, and that it was an attempt to unite a party that had become heavily divided.

Peterson, who has been an outspoken supporter of the truckers’ convoy as well as a scathing critic of Trudeau, took the former Liberal staffer to task, saying, “You are a stunningly corrupt and incendiary fool @gmbutts and the story will be the cowardice of your leader @JustinTrudeau and the lies of your damnable lying calumnous cronies.”

Butts responded by advising Peterson to take down the tweet, and that the opportunity to do so was “time limited.”

Many have interpreted the tweet as some sort of threat, with one Twitter user pointing to Butts’s involvement in the SNC-Lavalin scandal as a complicating factor in any subsequent legal action.

Peterson replied to Butts, saying “I’ve been threatened by people a lot more terrifying and able than you @gmbutts and your calumnious compatriots. So watch yourself and your loose mouth.”

Butts went on to clarify his threat, saying that Peterson’s accusation of corruption is defamatory, and that his previous statement should be retracted with an apology.

As of publication time, Peterson had issued no such apology, and his response to Butts remained pinned to the top of his Twitter account.