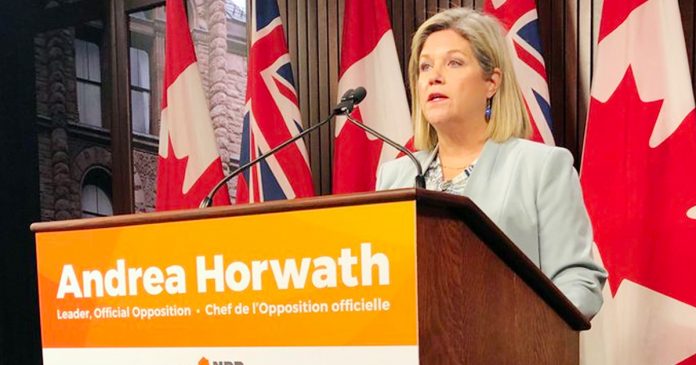 Ontario NDP Leader Andrea Horwath has said that Premier Doug Ford is caving to anti-vaxxers by announcing he is dropping vaccine passports.

Horwath claimed that vaccine passports are helping to keep Ontario open and are protecting people.

“Ending vaccine certificates is risky, and scary — for seniors, parents whose little ones are too young to get the shot and everyday folks who want to know that the person on the treadmill next to them at the gym or eating across from them at the diner are vaccinated,” said Horwath in a press release on Monday.

The Ontario government announced on Monday that they would be easing public health measures sooner than expected.

“This is great news and a sign of just how far we’ve come together in our fight against the virus,” said Ford. “While we aren’t out of the woods just yet, we are moving in the right direction.”

The press release said that effective Thursday, social gathering limits would increase to 50 people indoors and 100 people outdoors while capacity limits would be dropped in places such as restaurants, bars, and gyms. Sports and concert venues would be permitted to operate at 50%.

The government also announced, however, that mandatory mask policies would remain in place for now, with a date for them to be lifted to be communicated down the road.

The percentage of Canadians who believe COVID-19 restrictions should come to an end has leapt from 40% to 54% in less than one month, according to polls

The latest poll, which was conducted by Angus Reid in January, suggested that more than half (54%) of Canadians strongly agree or agree it is time to end restrictions and “let people self-isolate if they are at risk.”

“The public sentiment appears to be moving in the direction of opening up communities,” said Angus Reid. “Indeed, in the past two weeks the number of Canadians saying they would like to see restrictions ended has risen by 15 percentage points, to a majority (54%).”