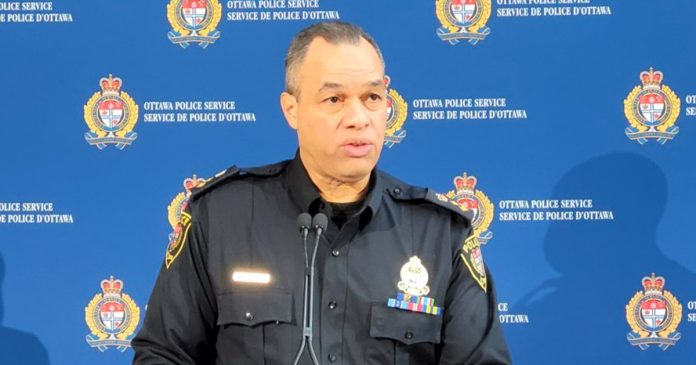 Ottawa Police Chief Peter Sloly has resigned from his position after facing criticism for his handling of the Ottawa freedom protests.

Sloly was in charge of coordinating law enforcement operations in the city and responding to the demonstrations on Parliament Hill which have entered their third week.

Sloly is reportedly to be replaced by Deputy Chief Steve Bell.

The Ottawa police board will hold a public meeting on Tuesday at 2:30 p.m. EST but has been behind closed doors since this morning.

First named chief in August 2019, Sloly left the job with two years left on a contract set to end in 2024.

Prior to his departure, Sloly alongside Ottawa Mayor Jim Watson requested 1,800 additional law enforcement officers to help end the protest.

“I came here to do a job and I’m going to get that job done all the way through,” Sloly stated last week.

On Monday, Prime Minister Justin Trudeau invoked the Emergencies Act to increase the powers of law enforcement to quash the protests. The Act would also allow the federal government to play a larger role in coordinating the response to the Canada-wide demonstrations against COVID-19 mandates.

The Liberals have seven days to table a plan and justification of their decision to Parliament which will then vote on whether to enable the government to adopt emergency powers.

Part of the act will allow banks to freeze funds of truckers without a court order and for government bodies to cancel their insurance.

Despite invoking the Emergencies Act, Trudeau had claimed last week that he didn’t believe “the contention that the city of Ottawa has exhausted its tools and resources.”

Police chair Deans, who received Sloly’s resignation, has described the Ottawa protest as “treason” and an “insurrection.”

“We all need to work together. This is not something this country has ever seen before,” said Deans last week. “I understand Mark Carney referred to it as sedition today. I think that’s exactly what it is.”

“This is treason. This is way bigger. This is a group of well-polished professional people that are trying to overthrow the government.”

The Freedom Convoy entered its 24th day on Tuesday.