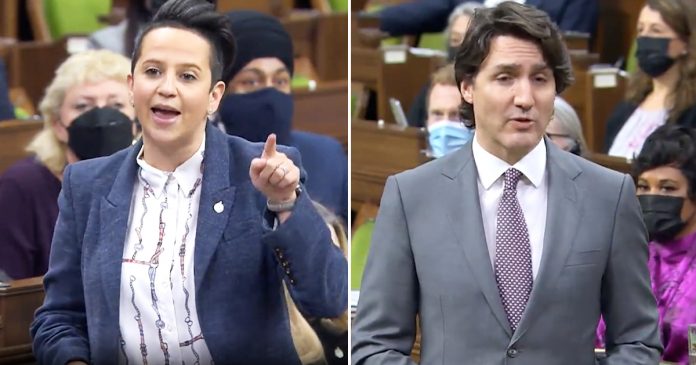 Lantsman, who is Jewish, is also a descendant of Holocaust survivors.

Trudeau offered no apology, even when pressed repeatedly by Lantsman herself and other Conservative party members.

Lantsman had pressured Trudeau about his use of inflammatory language to describe citizens who disagree with him, referring to a statement he had made six years ago.

For comparison, Lantsman then summarized one of Trudeau’s comments from 2021.

“When did the Prime Minister lose his way – when did it happen?” Lantsman asked.

In response to these criticisms, Trudeau continued his inaccurate claim that Conservative Party members had stood with those that flew swastikas and Confederate flags.

Lantsman was born to a Russian-Jewish family and is a member of the LGBTQ community.

She has also been a vocal critic of any individuals flying swastikas and Confederate flags at the Ottawa freedom protests.

“It’s possible to respect the right to protest even if you disagree — while condemning the reprehensible symbols used by some who have attached themselves to this convoy. Nazi flags are wrong, always,” Lantsman tweeted on Jan. 29.

The Conservative response to Trudeau’s remarks were swift, with House speaker Anthony Rota reminding everyone – including Trudeau – not to use inflammatory language.

Lantsman replied that Trudeau’s comments were “unbecoming of a prime minister” and demanded an apology.

Lantsman later tweeted, “I think the Prime Minister should think long and hard about his own history before singling out a Jewish Member of Parliament and falsely accusing me of standing with a Swastika. What a disgraceful statement unbecoming of anyone in public office –  he owes me an apology.”

As of Wednesday evening, Trudeau had yet to offer Lantsman an apology.