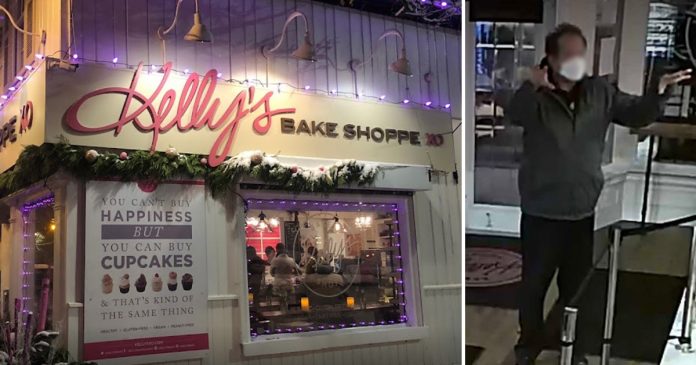 Employees at a Burlington, Ontario bakery are being harassed online and at their place of business after it was revealed that one of the owners donated to the Freedom Convoy fundraiser.

In an interview with True North, Kelly’s Bake Shoppe co-owners Erinn Weatherbie and Kelly Childs stood by their $1,000 donation but say they are dismayed by the harassment they are now receiving from angry members of the public.

Weatherbie and Childs told True North about one such encounter, where a middle-aged man confronted their all-female staff over the donation at 6:15 pm on Tuesday evening.

“A man entered the bake shop and waited in line as if he was going to place an order. When one of our staff members had a chance to help him out and welcome him to the shop, he basically aggressively responded to them,” said Weatherbie.

“He said ‘Did you donate $1,000 to the trucker convoy? Do you support traitors? It’s all over social media. Were your staff involved in donating?’ He was very aggressive, and he also kept one of his hands in his pocket the whole time.”

According to Weatherbie, one young female employee asked the man to leave multiple times and threatened to call the police. Earlier that day, the business also received an email from the same individual asking whether they had donated.

True North has been shown email correspondence from the individual. Another email shows an anonymous individual accusing the bakery of supporting “white supremacists.” True North is not identifying the man at this time, as he is not currently facing criminal charges. If charges are pressed, True North will identify him.

“She had to ask him – I would say at least five times – to leave the store, and he kept on basically harassing her,” said Weatherbie. “The staff on shift at the time were all young women, girls basically under the age of 25, so for a man to come in and aggressively verbally assault our staff members is shocking.”

The man eventually left on his own accord following the confrontation.

Kelly’s Bake Shoppe is now considering hiring private security and will be advising its employees to be more cautious about their personal safety. The bakery also filed a report with the police who came to review security footage.

The owners’ donation to the Freedom Convoy was publicly linked to the business on Monday after hackers illegally obtained and leaked a list of all donors who gave through a GiveSendGo fundraiser. This fundraiser was launched following a previous fundraising campaign on the platform GoSendMe was cancelled by the tech firm. Anonymous Twitter accounts immediately began doxxing convoy donors, and prominent members of the legacy media and the Liberal Party of Canada were sharing the illegally hacked materials online.

“(Our staff) definitely felt threatened when I talked to them on the phone immediately after it happened,” said Weatherbie.

“We run a very kind, loving, all-inclusive business, and then you have this tyrant, belligerent human that believes that his way is the only way. You know he would be happy I guess if our bank accounts got frozen,” said Childs.

“Our staff are just loving, beautiful people. They were shocked and literally shaking.”

True North reached out to the man who harassed the bakery employees. He admitted to going to Kelly’s Bake Shoppe to ask them about the donation but said he didn’t think it was a confrontation.

“I just asked them. It was just open. I asked them to get clarity in my mind because they’re three blocks away from me. It’s disturbing that there are people involved in this convoy this close to my house. It’s scary,” he said.

“I didn’t confront them. I didn’t do anything to them.”

Additionally, he stated that while police did call him to follow-up on what happened, he is not currently facing any charges.

Since their information was illegally leaked in the GiveSendGo hack, Kelly’s Bake Shoppe has been facing a steady stream of harassment online and experienced another incident of in-person harassment.

“We had somebody outside – we don’t know who it was. I don’t have a description of this person, but he was outside and he was heckling the customers waiting outside in line,” said Weatherbie.

“He was telling them not to shop at our business,” said Childs.

Eventually, the individual ran away after employees came out and threatened to call the police.

One email shown to True North from the address f*[email protected]*tch.com sent to the company’s careers portal called for the owners to be “dragged into the streets.”.

“You are a f*cking scumbag TRAITOR and should be dragged into the streets like the dog you are,” the anonymous sender wrote.

Other social media messages accused the business of supporting an “anti-vaxx and white supremacist” movement and “working against Canada.”

Weatherbie said she supports the truckers’ message of freedom and unity.

“We support the freedom convoy’s mission of ending the vaccine mandates and getting back to normal. We support freedom for all. Period. Like the majority of people, that was our reason for donating to the cause. We followed the rules for two years, and we’re ready for life to return to normal. It’s time” said Weatherbie.