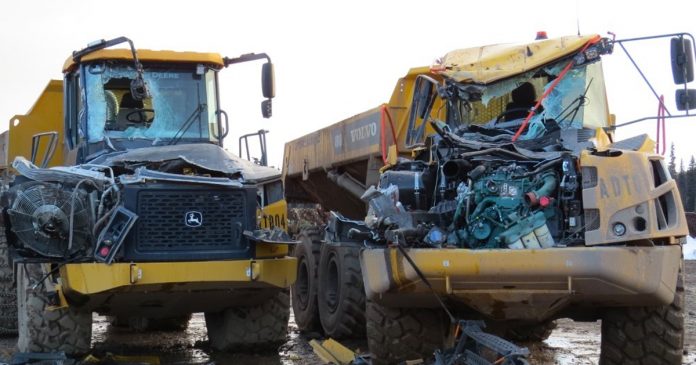 British Columbia RCMP are investigating after a mob of approximately 20 masked people reportedly attacked security guards with axes, smashed their vehicles’ windows and destroyed heavy equipment at a natural gas pipeline site in a remote corner of the province.

One officer was also reportedly injured after someone threw smoke bombs and blazing sticks of wood at police.

Just after midnight in the early hours of Thursday morning, RCMP in Houston BC say they were called to the Marten Forest Service Road deep in the woods at a worksite managed by Coastal GasLink.

It was initially reported that some natural gas pipeline employees were trapped, but it was later discovered that all had managed to safely leave the area.

At the 41 kilometre mark of the service road, police report the roadway had been blocked with “downed trees, tar covered stumps, wire, boards with spikes in them, and fires had been lit throughout the debris.”

Police reported that as they worked their way through the debris and traps, several people threw smoke bombs and flaming sticks at the police, injuring one officer.

About 60 kilometres down the service road, police say they found several pieces of heavy equipment that had been smashed, burned and destroyed, including a work trailer that had its wall ripped off.

A statement by Coastal GasLink on Thursday said that “approximately 20 masked and violent attackers wearing camouflage surrounded and attacked Coastal GasLink workers in a highly planned and dangerous unprovoked assault.”

“This coordinated and criminal attack from multiple directions threatened the lives of several workers. In one of the most concerning acts, an attempt was made to set a vehicle on fire while workers were inside.”

“The attackers also wielded axes, swinging them at vehicles and through a truck’s window. Flare guns were also fired at workers. Workers fled the site for their own safety and remain shaken by this violent incident. Fortunately, there were no physical injuries to Coastal GasLink workers.”

RCMP Chief Superintendent Warren Brown called the incident “a very troubling escalation in violent criminal activity that could have resulted in serious injury or death.”

“This was a calculated and organized violent attack that left its victims shaken and a multimillion dollar path of destruction,” said Brown. “While we respect everyone’s right to peacefully protest in Canada, we cannot tolerate this type of extreme violence and intimidation. Our investigators will work tirelessly to identify the culprits and hold them accountable for their actions.”

Coastal GasLink LNG Pipeline sites in northern BC have repeatedly been subject to vandalism and protests, with numerous arrests by RCMP.

The Morice River pad where these attacks took place was formerly the site of a blockade that lasted 59 days.

“Our work is lawful, authorized, fully permitted and has the unprecedented support of local and Indigenous communities and agreements in place with all 20 elected First Nation councils across the 670 km route,” Coastal GasLink stated on Thursday, adding that the project is almost 60% complete.