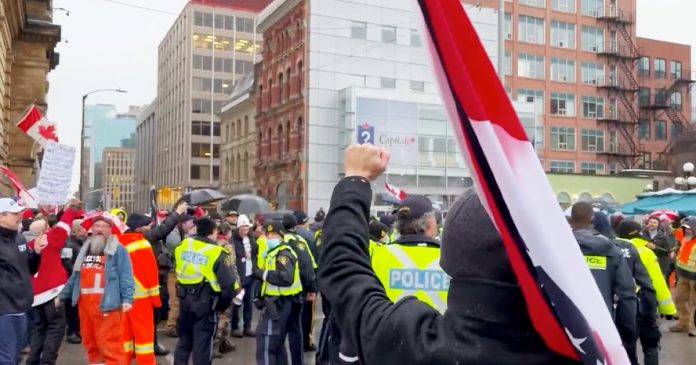 Law enforcement in Ottawa has begun to move on Freedom Convoy protest organizers after Prime Minister Justin Trudeau invoked the Emergencies Act on Monday to quash demonstrations throughout the city.

Protestors have been in Ottawa for over three weeks now, demanding an end to all COVID-19 mandates and restrictions.

True North fellow Andrew Lawton posted a video clip of a police cruiser taking away an unidentified protestor who had just been arrested. Supporters can be heard chanting “freedom” as music plays in the background.

A photo of Barber shows him in handcuffs as police lead him into a nearby cruiser.

Law enforcement gave warnings to demonstrators earlier this week that they would be subject to arrest for attending the protest.

According to the Order in Council detailing the powers granted to the government by the Emergencies Act, the feds can take “measures to regulate or prohibit any public assembly — other than lawful advocacy, protest or dissent — that may reasonably be expected to lead to a breach of the peace.”

Police plan to set up an estimated 100 checkpoints throughout Ottawa’s downtown, saying they would make sure only people working or living in the area would be allowed to enter.

“Action is imminent. It’s time to go. Your time in our city has come to an end and you must leave,” said Ottawa Police Chief Steve Bell on Thursday.

In response to True North reporter Elie Cantin-Nantel during a Feb. 6 press conference, convoy organizers declared that they would be willing to go to jail for their beliefs.