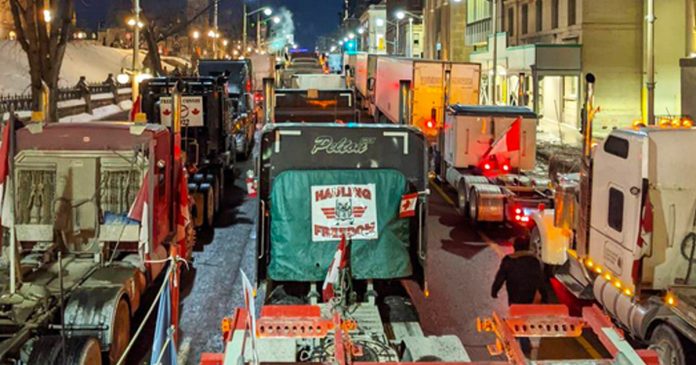 A chief official at the Financial Transactions and Reports Analysis Centre of Canada (FINTRAC) has denied claims of foreign extremist funding now being peddled by Liberal politicians and legacy media.

During a Standing Committee on Public Safety and National Security meeting last Thursday, FINTRAC Deputy Director of Intelligence Barry MacKillop said that there were no signs that what was happening in Ottawa was a form of ideologically motivated violent extremism (IMVE).

IMVE is a categorization system introduced by the Canadian Security Intelligence Service in their 2019 public report.

Liberal MP Taleeb Noormohammed had asked MacKillop how concerned Canadians should be about foreign funding of extremist movements.

“We’ve seen over the course of the last little while a lot of interest from the United States in the funding situation related to GoFundMe and the blockade of Ottawa,” Noormohammed said. “We’ve seen some fairly unsavoury characters in the US like Marjorie Taylor Greene weighing in on this. How concerned should Canadians be about foreign funding or foreign funds coming into Canada and spurring on ideologically motivated violent extremism?”

“The money… what’s happening in Ottawa has not been identified to my knowledge as ideologically motivated violent extremism,” MacKillop responded. “Somebody might come into Canada to support ideologically motivated violent extremism and the United States would be extremely concerned about money leaving the States or funding such extremist actions.”

“Do you have any concerns or has there been any flags raised thus far around potential sources of funding for what has been happening in Ottawa?” asked Noormohammed.

MacKillop replied that FINTRAC has not seen an uptick in reporting on suspicious transactions related to the peaceful protests in Ottawa.

Earlier this week Prime Minister Justin Trudeau invoked the Emergencies Act under the pretense that the ongoing anti-COVID-19 mandate protests have had an adverse effect on the Canadian economy and threatened the country’s economic security.

“I spoke yesterday with the head of FINTRAC, and we are in close touch with that very important organization. The reality is that FINTRAC lacked the necessary authorities to oversee the new world of cryptocurrency and crowdsourcing payment platforms,” claimed Freeland.

To date, blockades at borders across Canada have already been dispersed.