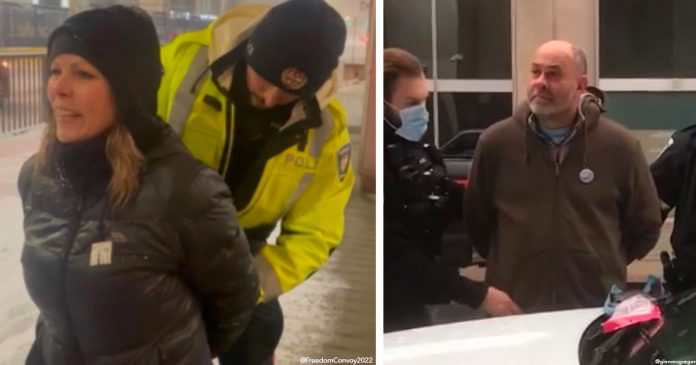 OTTAWA–As police move to secure a perimeter around downtown Ottawa and arrest two key convoy organizer, many of the truckers protesting in front of Parliament Hill are planning to stay in place.

As news of the arrest made its way among the protesters, many seemed unfazed.

“I’m not surprised,” one trucker told True North. “I bet he (Barber) wasn’t either.”

One organizer told True North the arrests were likely to embolden the truckers.

“They want to demoralize us,” the organizer said. “It won’t work.”

Shortly after Barber’s arrest and before her own, Lich urged supporters to “hold the line.”

It’s a phrase that’s become a rallying cry for protesters in recent days as police ramp up enforcement efforts.

There were at least two other arrests Thursday afternoon.

One man was arrested after several complaints to the police by supporters of the convoy, who told True North he was often aggressive towards other demonstrators, including allegedly spitting on them. Convoy protesters applauded as police subdued him after a short struggle and carried him into a police car.

The protesters then thanked police for removing him.

A speaker up on the convoy site’s flatbed stage implored the crowd to give the police space, and said the man had been arrested because he was “not being safe.”

Another man was arrested after a large group of police entered a crowd of demonstrators. Police on the scene were tight-lipped about why they were making the arrest.

Thursday morning, Ottawa police established a “secure area” covering most of the city’s downtown. Police have said they intend to question anyone entering the area to ensure they have a “lawful” reason for doing so. They maintain under the federal government’s emergency declaration that joining the protest is illegal.

Inside the secure area, protesters continued to be in high spirits, dancing, barbecuing, and hot tubbing well into the evening – despite sleet and forecasts of 30cm of snow overnight.

One tractor-trailer has been converted into a “truckers lounge,” with snacks, beverages, and heat available to drivers.