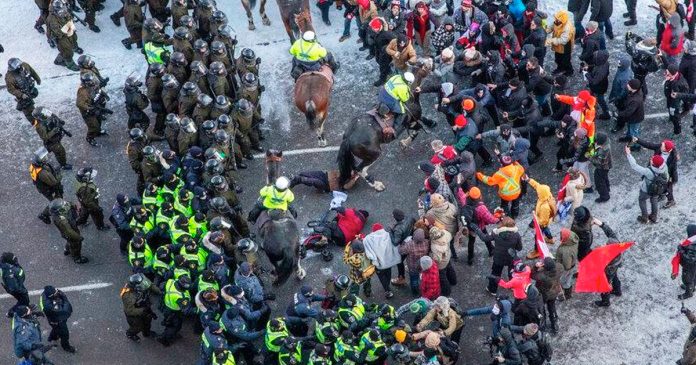 On day 27 of the Truckers For Freedom Convoy, police trampled and beat peaceful protesters, a True North journalist was pepper-sprayed and the world watched on in disgust.

The day began with the Trudeau government cancelling debate over the Emergencies Act in the House due to police action on adjacent streets around Parliament Hill.

Riot police had been flown in from all corners of Ontario to shut down the protest. They were armed with heavy firepower, riot gear, pepper spray, tear gas and batons.

Police deployed riot horses and pepper spray, vehicles’ windows were smashed, and over 100 arrests were made.

In what was likely the most horrifying scene of the day, police on horseback charged the crowd and trampled an elderly First Nations woman who had pleaded that the protest was peaceful.

Her condition in hospital is unknown at this time.

This picture shows the chaos from above.

Pepper spray was deployed on both non-violent protesters and the media, including True North Senior Fellow Andrew Lawton.

Here is what happened to Andrew.

This was the tense moment before police charged protesters in front of the Chateau Laurier and Andrew was maced.

Andrew livestreamed events throughout the day.

A large police presence was seen outside the Westin Hotel where the arresting of protesters began this morning.

A shocking moment was captured by a Global News livestream as police manhandled a veteran.

Ottawa Police tweeted that protesters were provoking officers on the scene.

Legacy media reported that the people who were trampled by riot horses had thrown a bike at the police.

A review of the evidence shows an elderly woman with her mobility walker.

This Global News report said that “a bicycle was thrown at the feet of one of the horses in an attempt to injure it, and one person was arrested for intentionally harming a police service animal.”

Elsewhere, police were seen beating a protester with what appeared to be the stock of his rifle.

Condemnation of police action poured in from observers around the globe.

“If it looks like something out of Belarus, it is. But it’s happening in a capital right here in North America,” Carlson said. “They kneed several demonstrators in the head…horses began trampling Canadians as they peacefully protested.”

“This kind of violence sponsored by Justin Trudeau continued all day…here’s the definition of tyranny. It’s oppressing your citizenry, ignoring the most basic standards of human rights and then preventing the worst of the world from seeing what you’re doing.”

“There is no emergency in Canada,” declared Bernier.  “No war. No insurrection. No terrorist attack that justified invoking this law. It is outright illegal, undemocratic and unconstitutional.”

Interim Conservative Party leader Candice Bergen wrote on Twitter that she was “disturbed and saddened” by what she was seeing in Ottawa.

Despite the shocking scenes that unfolded during the day, protesters in Ottawa resiliently celebrated another night on Wellington Street by lighting fireworks and dancing.

True North will continue to bring you more coverage throughout the weekend.

The House of Commons is expected to resume its debate over Trudeau’s implementation of the Emergencies Act on Saturday.

The Givesendgo set up by the Truckers for Freedom Convoy organizers had reached USD $9,679,468 by the time this article was published.