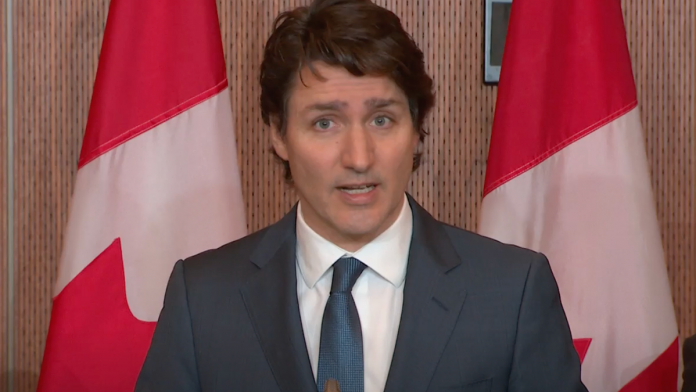 Despite all border crossings being cleared and the crackdown on peaceful protesters in Ottawa concluded, Prime Minister Justin Trudeau indicated Monday that the government would look to extend its use of the Emergencies Act for at least another four weeks.

The vote will take place in the House of Commons on Monday at 8pm ET.

Trudeau justified invoking the Act and urged other MPs to support its continued use.

“Invoking the Emergencies Act has been necessary. Law enforcement agencies relied on it to set up secured areas in downtown Ottawa and at border crossings,” said Trudeau.

“It prevented foreign money from continuing to fund illegal blockades, and it’s making sure our borders remain open. It has been the responsible thing to do.”

The vote is expected to pass. Although Trudeau has a minority government, he needs the support of only one other party to go ahead with the unprecedented measure.

The Conservative Party of Canada and the Bloc Quebecois have both indicated they will vote no, but Jagmeet Singh has said the NDP will support the government.

Singh announced in a media availability on Monday that the NDP would be “reluctantly” supporting the Emergencies Act in order to “protect democracy” and “protect workers” in the house today.

Singh went on to say that the NDP will “pull their support and trigger a vote” on the Emergencies Act as soon as they feel it is “no longer necessary.”

Trudeau had said those who vote no on the use of the Act were only doing so because they didn’t trust the government.

“I can’t imagine that anyone who votes no (on the Emergencies Act) is doing anything other than indicating that they don’t trust the government to make incredibly momentous and important decisions at a very difficult time,” said Trudeau on Monday.

Since the act was invoked, supporters of the freedom convoy have had their bank accounts frozen and police in Ottawa brutally cracked down on protesters over the weekend.

MPs began debating the vote on Saturday after the Liberals cancelled Friday’s session due to police action around Parliament Hill.