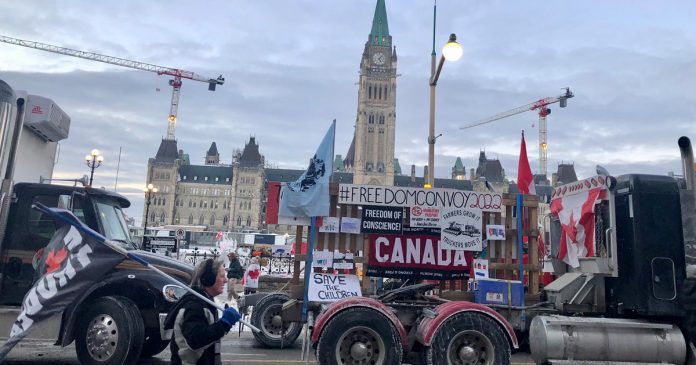 After complaining about the obstructions and gridlock Freedom Convoy protesters caused on Wellington Street over three weeks, some Ottawa city councillors now want to see the parts of Parliament Hill’s main thoroughfare closed to vehicles altogether.

Councillor Catherine McKenney announced on Twitter Monday afternoon that she would be bringing a motion forward at Wednesday’s city council meeting to keep a portion of the busy Ottawa street shut to vehicular traffic.

The motion is being seconded by councillor Jeff Leiper, who like McKenney opposed the peaceful freedom convoy demonstrations. He also welcomed the federal government invoking the Emergencies Act.

Councillor Mathieu Fleury also chimed in on the issue, saying he does not think Wellington Street will reopen to traffic.

“It’s going to look like a street for the time being, but it’s likely going to be converted into a pedestrian plaza,” Fleury told CBC.

Wellington Street is one of Ottawa’s most vital thoroughfares, running east to west past not only the Parliament Buildings but also the Supreme Court of Canada, National Library and Archives and National War Memorial.

Progressivist Ottawa City councillors are not the only ones in favour of permanently closing parts of Wellington Street to traffic. Liberal MP Greg Fergus, who voted in favour of invoking the Emergencies Act to deal with convoy blockades on Monday, is also on board.

“I think we can [bring] our Parliament more to the people, and this is a great way of doing it. I like his idea. I’d like to see it even go further,” Fergus told CBC.

The city of Gatineau, Quebec just across the Ottawa River from Parliament Hill currently plans to build a light rail system into Ottawa’s downtown core. Some are saying that trains could replace cars on Wellington Street.

A proposal by architecture firm MCROBIE shows the prominent Ottawa street turned into a pedestrian mall with trees, benches and fountains, and a train running on each side.

Not everyone is on board with the idea, however. Critics point out the ridiculousness of removing peaceful protesters to clear the street for traffic, then opting to keep it closed permanently.

The proposal is also being criticised as an anti-car policy, with some pointing out that Ottawa’s downtown already has a pedestrian street a block away from Wellington.

Ottawa’s Sparks Street, which was a prominent street housing several department stores including Murphy-Gamble, Morgan’s, C.Ross, and Bryson-Graham’s, was closed to traffic in 1967.

Most of the stores have since closed, with the street’s main tenant now being the government of Canada.

On Friday through Sunday, police forcibly removed freedom convoy demonstrators who were calling for the end of COVID-19 mandates and restrictions. They dispersed the crowds using chemical irritants, batons and riot horses, among other tools.