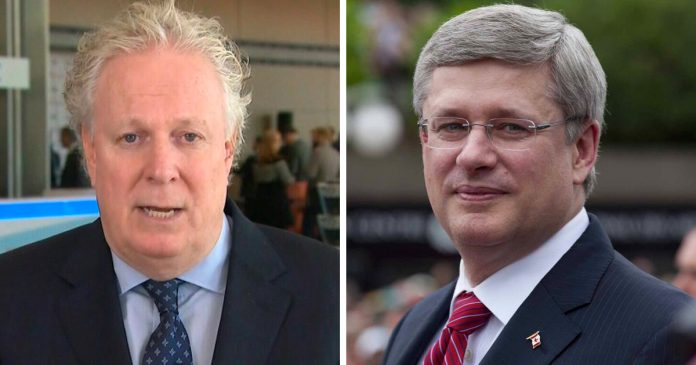 Sources close to former prime minister Stephen Harper have said that if former Quebec premier Jean Charest runs for leadership of the Conservative Party, Harper will use his influence to keep Charest from winning.

According to the French-language outlet La Presse, Harper made the pledge in response to rumours that Charest was thinking about running.

“He will not sit idly by if Jean Charest enters the race,” an unidentified source told the outlet.

“The boss is of the opinion that Jean Charest is not a real conservative.”

While Premier of Quebec, Charest denounced Harper in 2008 over several Conservative Party of Canada (CPC) policies including cuts to the arts sector and abolishing the long gun registry. Harper had also spoken out in 2020 against a possible bid by Charest for the party’s leadership.

The Conservatives are expected to officialize a leadership race this year after former CPC leader Erin O’Toole was ousted by caucus earlier this month.

A faction of Conservative MPs have already called on Charest to enter the race to be O’Toole’s successor. In a letter, MPs from Quebec, Ontario and Nova Scotia appealed to Charest to run out of a “sense of duty.”

Among the signatories was MP Alain Rayes.

“Mr. Charest, Canada needs you. The leadership race for the Conservative Party of Canada boils down to one fundamental question: who is best positioned to unseat the federal Liberals and finally provide our country with a Prime Minister who will revive our economy and govern with confidence under the Conservative banner?” the letter read.

To date, only CPC MP Pierre Poilievre has publicly announced his intention to run for the top spot.

Positioning himself as a staunch fiscal conservative and a step away from O’Toole’s red-Tory leanings, Poilievre told supporters that he was running “to give (Canadians) back control of (their) life.”

“Together, we will make Canadians the freest people on earth with freedom to build a business without red tape or heavy tax,” Poilievre said.

“Freedom from the invisible thief of inflation. Freedom to raise your kids with your values. Freedom to make your own health and vaccine choices. Freedom to speak without fear and freedom to worship God in your own way.”

The House of Commons skirted a federal election on Monday when Prime Minister Justin Trudeau announced that the vote to support his implementation of the Emergencies Act would be a confidence vote.

The vote passed with the support of Jaghmeet Singh and the NDP.