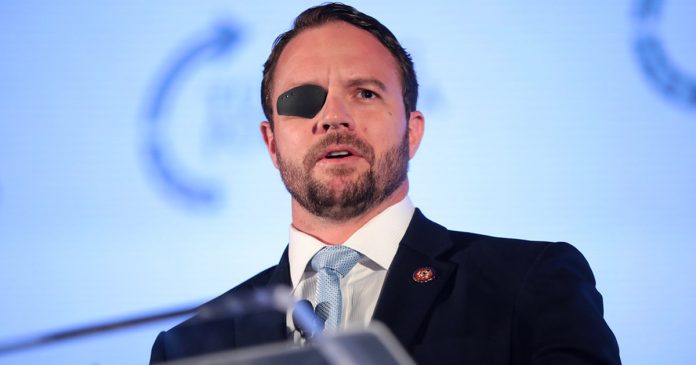 After reminding persecuted convoy protesters last week that the US has a trucker shortage and a work visa program, Texas Republican congressman Dan Crenshaw is calling Prime Minister Justin Trudeau a dangerous authoritarian.

“Justin Trudeau is living proof that annoying-but-harmless wokeism can quickly evolve into dangerous authoritarianism,” said Crenshaw in a tweet on Monday. “Never underestimate the force with which the self-righteous will act to suppress the freedom of others, especially under the guise of compassion.”

Crenshaw, who is also a former Navy SEAL, said last week that people participating in the Freedom Convoy should consider moving to the US.

“Quick note to Canadian truckers being fired and now targeted as ‘terrorists’ by your woke government: The USA has a trucker shortage and a work visa program,” he said.

New Mexico Republican congresswoman Yvette Herrell has also announced that she will be bringing forth a bill to grant political asylum to “innocent Canadian protesters who are being persecuted by their own government.”

Herrell said on Saturday that Trudeau’s crackdown on the Freedom Convoy is “not the action of a western democracy, but that of an authoritarian regime like Venezuela.”

“Just as we provide asylum for political prisoners, we should do the same for truckers who have been subjected to violence, had their property confiscated and their bank accounts frozen by a government that is quickly becoming the embarrassment of the free world,” said Herrell.

She added that Americans could not be silent as the Canadian government attacked peaceful protesters.

Hundreds if not thousands of police engaged in heavy-handed tactics when they moved in to suppress the peaceful freedom convoy protests in Ottawa on Friday through Sunday.

The Ottawa Police Service confirmed that 191 people had been arrested and 389 charges had been laid.

Police cordoned off multiple areas across the capital, setting up 100 checkpoints and demanding to see journalists’ licences. True North and Rebel News reporters were in several cases denied access while legacy media were let in.

Despite the crackdowns, Trudeau opted to continue the Emergencies Act that granted police the extra powers to conduct their actions. Continued implementation of the act passed a vote in the House of Commons on Monday with crucial support from Jaghmeet Singh and the NDP.

The financial accounts of many convoy truckers and supporters have been frozen under the government’s emergency order. On Tuesday, Blacklock’s Reporter announced that $8 million in finances had been suspended, including the accounts of people who donated as little as $20.