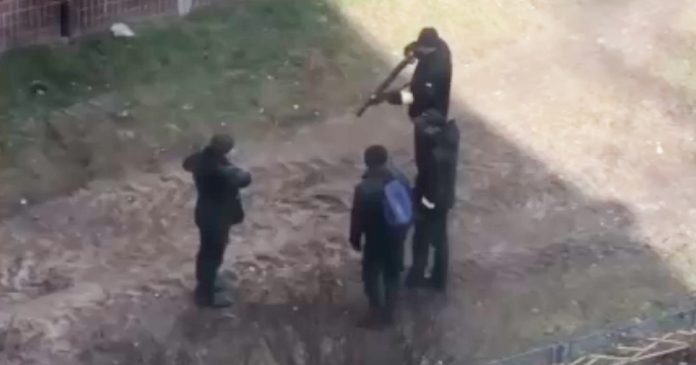 The situation in Kiev is “not as black and white as the media is portraying it,” a source on the ground in Kiev who spoke to True North through a translator said on Sunday.

“People are more scared of the armed citizens than the Russian military,” said the source.

The source, a senior who lives in the city center, said he and his wife are “more scared of looters with guns right now.”

The man has his old military rifle out, just in case, the translator noted.

The source sent photos of several dead bodies piled on the side of the street in Kiev, noting that it depicts “a family that got killed when they were mistaken for a military vehicle.”

The source also sent two videos, which are circulating on the messaging app Telegram, showing what was described as “armed citizens now just questioning and in one case shooting people they deem suspicious. It’s scary.”

On February 23, in the face of an impending attack from the much larger Russian army, the Ukrainian Parliament declared a state of emergency and passed a law allowing citizens to carry weapons in public.

As a sign of support to Ukranians defending their homes, many western countries, including the UK, Germany and Belgium, began sending weapons and military equipment to Ukraine.

Ukraine’s standing army is relatively small, with only 40,000 deployed personnel and 245,000 active members. Ukraine’s active military budget is around $6 billion.

Compare this with Russia, who has over one million deployed military personnel and another million in reserve. Russia, who has the world’s fifth largest military, spends approximately $62 billion annually on military spending.

To make up for this incredible gap in spending and man-power, citizens have been filling in the gap. But according to the source in Kiev, it’s turned into anarchy, including looting, robbing and gruesome murders.

Much of the Western coverage in the media are failing to show this side of the story.

“The propaganda in western media is extreme – even by the standards they are used to,” the translator told True North.

As Russian forces have approached Kiev, the city has been placed under a curfew until Monday morning – with residents ordered to stay indoors. Those outside may be considered and treated as Russian infiltrators.

Ukraine’s president, Volodymyr Zelensky, alleges that Russian infiltrators and saboteur teams have entered Kiev with the goal of collecting intelligence and attacking targets within the city.

Ordinary Ukranians have been mistaken for Russian agents and killed by armed civilians.