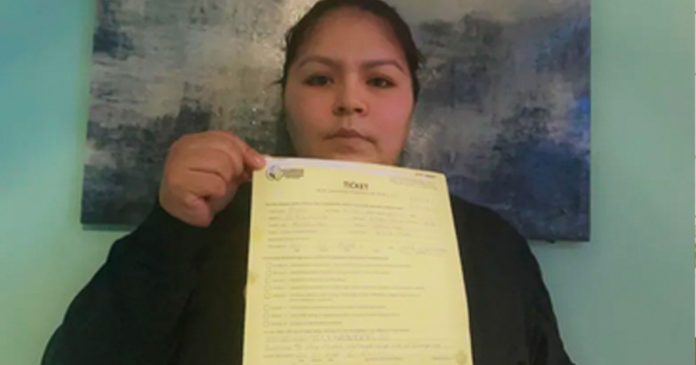 A group of Manitoba mothers is awaiting a tribunal’s decision after appealing $35,000 worth of tickets they received for travelling to buy groceries and diapers during a stay-at-home COVID order in January.

Kattey Hart, a mother of four in Nelson House, Manitoba told True North that she and seven other women made the decision to travel to Thompson an hour away on Jan. 20 to buy much-needed essentials including baby food, infant supplements and milk.

The women live in Nisichawayasihk Cree Nation (NCN), about 670 kilometres north of Winnipeg. Hart said the grocery store in the NCN was closed and that the community’s paid grocery delivery system was far behind schedule.

Hart said they were originally given permission to leave the community to go to Thompson but that they were stopped on the return home.

There was a confrontation involving First Nations Safety Officers and RCMP that eventually saw the women let through.

Seven of them were subsequently given $5000 tickets each for violating the stay-at-home order, which specifies “no travel except medical emergency.”

“When I seen that the ticket was $5,000, I thought the ticket was outrageous and crazy,” said Hart. “I’m not paying for this – I’ll put it in a frame and tell my grandkids a story of how I took a stand to put food in the cupboards and fridge.”

Hart told True North that the group appealed the tickets to the NCN.

On Feb. 7, Hart received a notice from Bonnie M. Linklater, NCN’s executive director of Justice & Public Safety, saying that her appeal had been received and that it had been “forwarded to the Peacekeepers Tribunal for further consideration.”

Hart says she then heard nothing until Monday when she received an email from Linklater saying she “would receive a notice of meeting when the Peacekeepers have completed a review of the Situation.”

“This is the first time I ever heard of them,” Hart told True North. “No one’s giving us answers – we mothers have been trying to contact the leaders and the Justice office here, and this is all we got. We were told to wait for the peacekeepers tribunal and not that they have one. I’m hoping we can get answers.”

According to an NCN news release on Feb. 25 – two weeks after Hart first received her notice of appeal –  the Peacekeepers Tribunal is a brand-new initiative that was brought about to mark the 2022 Aboriginal Justice Day.

“To mark the day, NCN has implemented Peacekeeping programs, laws and a tribunal of their own to ensure safety of Citizens in the future… NCN is honoured to have the newly appointed Peacekeepers Tribunal: Jimmy Hunter Spence, Carol Prince, Agnes Spence, Curtis McDonald and Justice Linklater.”

In 2018, the NCN became the first Manitoba First Nation to adopt its own constitution.

An outline of the tribunal’s duties and jurisdiction can be found on a job posting. They range from deciding whether to uphold a removal of an NCN’s members “benefits, eviction or banishment” to ruling on whether “an NCN Citizen who was convicted of an indictable offence for murder, manslaughter or a sexual assault of any nature should be allowed to run for Chief or Councillor.”

“The Peacekeepers Tribunal shall have the authority to determine any constitutional questions that arise in matters before the Tribunal.”

Hart said she and the other women will do what they have to in order to dispute the tickets, saying the $5000 fines are grossly unfair, especially considering their children’s needs.

Marcel Moody, chief of NCN, told the CBC in early February that the $5000 fines were a group decision of the band’s leadership, adding that he would like to see them reduced.

“We’re not there to starve people, you know. Children especially,” said Moody. “Everything will be taken into consideration and we will go through a fair process.”

At the time, Moody said he had hoped to resolve the situation within the week.

“Very few of our children are vaccinated. We must protect our children,” Moody wrote. “…For two years we have tried to put in place reasonable rules to prevent people from getting sick and dying.”

Since first speaking out about the fines in early February, some of the women say they have experienced vandalism of their homes and vehicles and that such a thing never happened before they had questioned the NCN leadership and council.

“We don’t want any more publicity, although we do want justice,” said one of the mothers anonymously. “I would like to see them nullify these fines.”

True North reached out to NCN Councillor Jackie Walker, who holds the justice and community safety portfolio, but did not receive a response by time of publication.