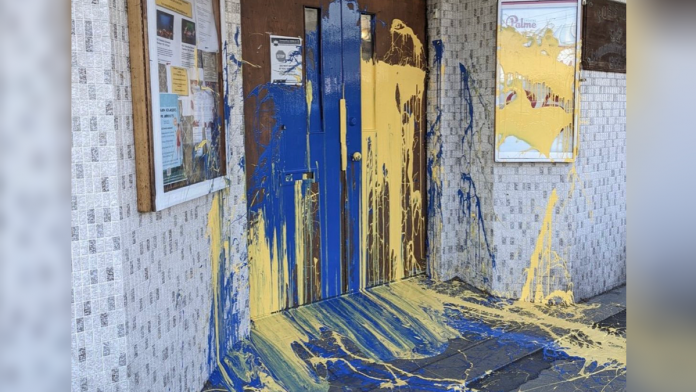 Anti-Russian attacks and sentiments are on the rise as Canadians react to the ongoing invasion of Ukraine by Russian armed forces.

On Friday night, a Russian community theatre in Vancouver was splattered with blue and yellow paint, signifying the colours of the Ukrainian flag.

According to a local business improvement association spokesperson, the attack was unfortunate but not unexpected.

“I slightly anticipated something might happen,” said Jane McFadden, who called the vandalism “a shame” on Twitter.

The attack against the property occurred even though the theatre’s operators have claimed to support Ukraine against Russian president Vladimir Putin’s actions.

In another incident last week, a Russian-born teenage OHL North Bay Battalion player was the victim of anti-Russian slurs during a game against the Sudbury Wolves.

The general manager of the Battalions Adam Dennis confirmed the incident to TSN.

“The investigation is in the hands of the league,” said Dennis.

In response, the OHL has committed to “monitoring the well-being of all players and especially those European players originating” from the countries involved in the conflict.

“The OHL has a strict discrimination, harassment and bullying policy, this includes discrimination based on country of origin. There is zero tolerance for violations of these policies,” noted OHL director of communications Josh Sweetland.

“It is the League’s intention to enforce this policy for any discrimination or harassment against Russian and Belarusian players.”

These actions come as the Trudeau government ramps up sanctions against Russia, including banning Russian crude oil and targeting Russian banking.

Last week, the Liberal government grounded a plane in Yellowknife that was carrying two Russian nationals. The plane’s pilots and those on board have since been charged for breaking recently implemented airspace restrictions.