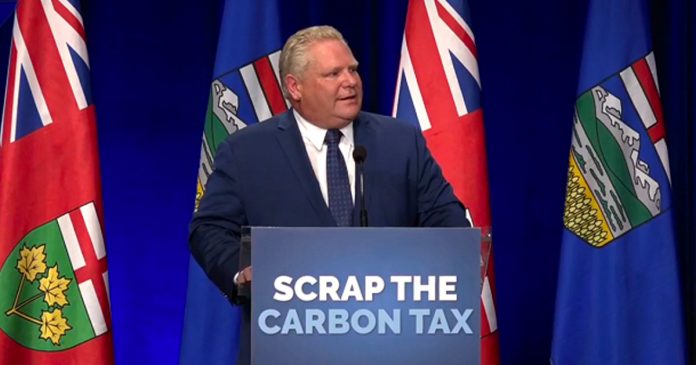 Jay Goldberg is Ontario Director at the Canadian Taxpayers Federation.

Ontario premier Doug Ford is sitting on his hands while Alberta premier Jason Kenney is delivering relief for taxpayers.

Earlier this week, Kenney announced his government would cut provincial gas taxes by 13 cents per litre in the face of skyrocketing oil prices. For a family filling up their minivan, Kenney’s tax cut means nearly $10 of savings at the pumps on every fill-up.

Kenney hadn’t previously promised to lower gas taxes for Albertans, but his government recognized that taxpayers are hurting and need help in the wake of soaring living costs.

Ford promised to lower gas taxes for Ontarians nearly four years ago. His pledge to lower the gas tax by 5.7 cents per litre is less than half of the relief that Kenney is delivering to Alberta taxpayers.

Lowering the gas tax by 5.7 cents per litre would save the typical Ontario family $400 a year.

A single mother filling up her minivan this week is paying, on average, 54 cents more per litre at the pumps than she paid exactly one year ago.

These soaring prices aren’t sustainable for hardworking taxpayers, and governments can do something about it.

While Ford cannot control the price of oil, taxes make up over 48 cents of the price of every litre of gas in Ontario. There’s a lot of room for government to lower taxes so hardworking taxpayers can make ends meet.

Ford campaigned for office in 2018 by promising to stand up for taxpayers. One of the central pledges of his campaign was to lower gas prices by 10 cents per litre. Ford delivered on part one of that promise, scrapping Ontario’s cap-and-trade carbon tax. But the second part of his promise, to lower the excise tax by 5.7 cents per litre, remains unfulfilled.

As recently as last November, Ford promised to deliver on his gas tax cut promise by the end of this month.

But in the last few weeks, Ford has been less decisive. Earlier this month, Ford promised to “look into” keeping his tax cut commitment.

Ontario taxpayers deserve better. With gas prices soaring and living costs out of control, Ontarians need political leadership that keeps its word. With Kenney having just announced a tax cut for Albertans more than double what Ford promised, it’s time for the Ford government to deliver.

It’s not just Kenney who is recognizing that taxpayers need relief at the pumps. Governments around the world, from South Korea to Spain and India, are cutting gas taxes to help their constituents deal with soaring costs.

As recently as two weeks ago, Ford insisted that his government is “here to put money back into people’s pockets.” But Ontarians’ wallets are getting lighter and lighter, and the government is failing to act.

If ever there was a time for the Ford government to deliver on lower taxes, it’s now. With inflation at its highest levels in over 30 years, taxpayers are hurting. Alberta’s government is showing leadership by cutting gas taxes. Governments across the word have responded in a similar manner. It’s time for Ford to get keep his promises and cut taxes.