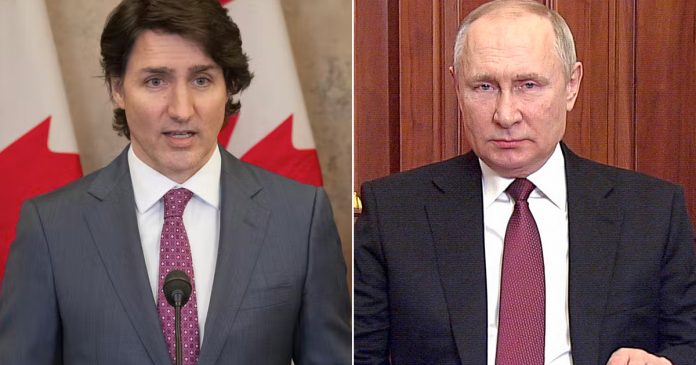 One day after Prime Minister Justin Trudeau’s visit to London to discuss Russia’s invasion of Ukraine, UK media outlets continue to skewer Trudeau over his handling of the Freedom Convoy protesters in Ottawa.

One commentator on talkRADIO called Trudeau’s crackdowns on protesters akin to the tactics Russian president Vladimir Putin uses against dissenters in his own country.

“This was the man that basically froze the bank accounts of truckers, decided that he was going to forcibly round them up. He took tactics directly out of the rulebook of Vladimir Putin to deal with his own people, and then he has the audacity and lack of self-awareness to stand at a podium and tell us that he wants to stand up for sovereignty and democracy?” said Cristo Foufas.

“Does he have no self awareness of what he is doing? And now Putin is clamping down on protesters and treating them absolutely appallingly. Obviously, there’s no comparison between what Trudeau has done with his people and what Putin is doing in Ukraine, but the Canadian police were pretty rough, and he was clamping down on free speech and protest.”

On Feb. 14, Trudeau invoked the Emergencies Act – for the first time in history – to quash peaceful protests against COVID-19 mandates in Ottawa. Among the powers assumed by the government was the ability to have banks and even cryptocurrency exchanges freeze the assets of protest participants and supporters.

Soon after the Act was invoked, a joint force of provincial, federal and municipal police moved into Ottawa with militarized equipment to arrest the remaining demonstrators, some of whom were struck with batons and trampled by riot horses.

After visiting Her Majesty Queen Elizabeth II on Monday, Trudeau was faced with a crowd of protesters and hecklers outside of 10 Downing Street ahead of his meeting with UK prime minister Boris Johnson.

As reported by the UK news agency Daily Express, Trudeau was forced to use the back entrance in order to avoid the jeers and “f*ck Trudeau” chants.

“But in footage being shared online, Mr Trudeau can be seen approaching Boris Johnson from the left-side, suggesting he used a different entrance to get to Number 10.”