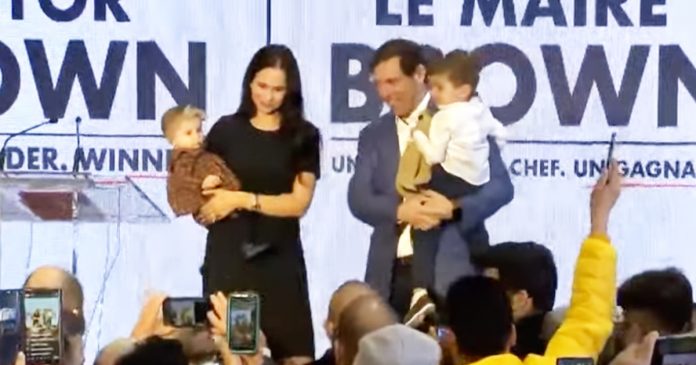 “I will fight to build a stronger Conservative Party – one that’s rooted in our values and principles, and that can topple the Liberals. The only thing that matters to me is a better future for you,” Brown said at his campaign launch on Sunday.

“The Conservative party I am fighting for is one that is principled and inclusive. I want people who have voted for other parties to feel welcome in our Conservative family.”

Brown spoke about his record as mayor of Brampton, saying that he pushed back against the Ontario government’s lockdowns during the pandemic.

“When COVID-lockdowns threatened the freedom of families and businesses – and the mental health of Canadians – I was one of the only big city mayors to speak out and demand an end to restrictions.”

“I’m the only big city mayor in Canada that has frozen taxes every year I’ve been in office while delivering four consecutive balanced budgets.”

“Conservatives deserve more than a leader who is an attack dog in opposition,” said Brown.

Brown says Poilievre has “already turned off many Canadians that we have to inspire in order to win a federal election.”

Last week, CTV expressed “regrets” about its reporting of a 2018 story that triggered Brown’s resignation as leader of Ontario’s Progressive Conservatives.

In a statement, the broadcaster said “details provided to CTV for the story were factually incorrect and required correction.”

“CTV National News regrets including those details in the story and any harm this may have caused to Mr. Brown,” the statement, first reported by the Toronto Star, says.