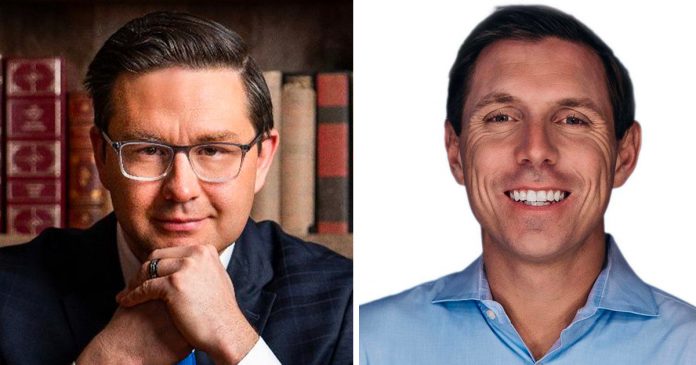 As the leadership race for the Conservative Party of Canada (CPC) deepens, candidates Pierre Poilievre and Patrick Brown have started butting heads hard.

The furor seems to have started when political adviser Jenni Byrne, who is currently working on Poilievre’s campaign, released an attack ad against Brown on Sunday.

The two-minute ad posted to Twitter concerns Brown’s time as leader of the Ontario PC Party, a position he held from 2015 to 2018, when Kathleen Wynne’s Liberals were still in power in the province.

Brown’s leadership of the party came to an abrupt end after CTV released a story detailing two allegations of sexual misconduct. Brown, who denied the allegations, successfully sued the broadcaster for defamation.

CTV said in a statement on Mar. 9 “details provided to CTV for the story were factually incorrect and required correction.”

Byrne’s ad claims Brown “will do and say anything,” highlighting his flip-flopping on the carbon tax and a promise to repeal Ontario’s controversial sex-ed curriculum.

The ad also touches on allegations of rigged nominations, voter fraud and ballot stuffing that took place in the Ontario PC Party under Brown’s leadership.

It brings up an investigation that found Brown had breached ethics laws, as well as an allegation that he had inflated Ontario PC Party membership numbers.

Finally, the ad brings up “questionable spending and contracts for Brown loyalists” as well as controversies that have occurred during Brown’s time as Mayor of Brampton.

These controversies include a failed university scheme and issues with Brampton’s integrity commissioner.

Patrick Brown fired back on Monday by releasing an old clip of Poilievre talking about Stephen Harper’s policies regarding the niqab.

“He has never once spoken out against these policies.”

The statement adds that “Pierre has no credibility announcing any sort of policy which largely impacts minority communities, such as immigration, because he’s never publicly stood against policies that disproportionately impact them, like the niqab ban, the tipline, or Bill 21.”

Poilievre responded to Brown’s statement the same day by releasing a statement of his own, in which he accused Brown of lying.

“Patrick Brown is lying in his attacks on the Harper government. There was no Niqab ban. I would never support that, nor did Mr. Harper,” the statement reads.

Poilievre said that “lying and dividing is no way to win.”

Brown responded to Poilievre by posting screenshots of posts related to the Niqab issue by Poilievre’s campaign supporters Tim Uppal and Melissa Lantsman.

“Your campaign co-chair and key endorser did a brave, good, thing and called out the niqab ban. With your statement below are you calling them liars too?” Brown tweeted.

While infighting is common in partisan politics, the barbed exchange between Poilievre and Brown has been criticized by other conservatives, who say the candidates should be focused on fighting the Liberals, not each other.

“The attacks … will be hard to heal if the nastiness continues. Which makes it more difficult to win in the general election, especially after you’ve written the Liberal attack ads yourself,” wrote Lilley.

Meanwhile, strategist Michael Diamond called out Brown on Twitter for his attacks on Harper policies, saying that it seemed silly of him to malign the last Conservative prime minister in a race for CPC leader.

Poilievre’s team has also been going after CPC leadership candidate and former Quebec Liberal premier Jean Charest, who introduced a carbon tax and raised sales taxes while he ran Quebec.

Poilievre also claimed Charest had a secret deal with Patrick Brown to ensure that one of the two men would become leader.

Conservative leadership hopefuls have until Apr. 29 to raise the $300,000 entrance fee and until Jun. 3 to sell party memberships.

The federal Conservatives will announce their new leader on Sept. 10.