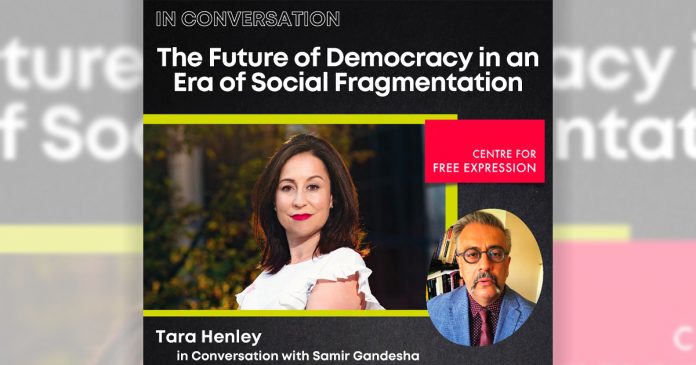 A former CBC producer who resigned from the outlet last year over its “radical political agenda” spoke at a university panel discussion on Tuesday, telling the audience that political polarization is affecting North American democracies.

“I’m hearing from people who are having really heated conflicts with people in their lives,” said Tara Henley. “That binary, that sort of good versus evil, kind of narrative.”

The event, called the Future of Democracy in an Era of Social Fragmentation, was held by the Centre for Free Expression at Ryerson University.

Henley said that for democracies to function, there has to be trust in institutions, an informed public and for people to feel their interests are represented. According to her, people are feeling that their governments are paralyzed, which is contributing to political polarization.

She added that part of the problem is social media with its massive amounts of misinformation.

Twitter, she said, is “a tiny snapshot and a quite ideological one.”

Henley continued by saying that Twitter makes people feel their views are not represented, adding that cancel culture is fuelled by social media.

Henley added that online platform Substack could help to reduce political polarization by slowing down discourse and encouraging thoughtfulness. When she posts the same article on Twitter, she said, she finds a different response.

“The criticisms you make of CBC are effective,” said Gandesha. “Key issues are not being addressed because of small identity issues.”

Gandesha said that in the contemporary political climate, left-wing political parties are forgetting about working class issues. He claimed that this ignorance has allowed working class people to be mobilized by the right and far-right.

Henley said that journalism had contributed to political polarization because it has stopped being a working class profession.

Journalism, she said, has become an elite profession, attracting people from financially stable backgrounds who have certain perspectives.

Henley made news in January when she penned a column for her Substack about why she had resigned from the CBC in 2021.

In the column titled “Speaking Freely: Why I resigned from the Canadian Broadcasting Corporation,” she said that working at the CBC means signing onto a “radical political agenda.”

“To work at the CBC in the current climate is to embrace cognitive dissonance and to abandon journalistic integrity,” she said.