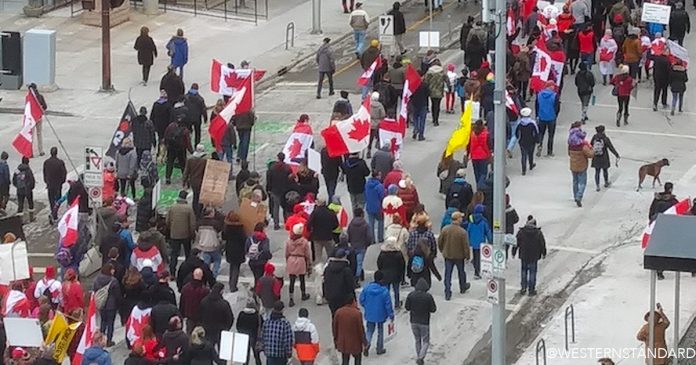 Calgary city officials and Calgary Police are urging “all citizens to reconsider participating in any unpermitted events” after Mayor Jyoti Gondek and City Council secured an emergency court injunction to respond to weekend freedom protests.

According to the City of Calgary’s news release, the injunction allows the city to better enforce bylaws and legislation and to give law enforcement more power to respond to demonstrators.

Every Saturday, thousands of protesters march through downtown Calgary in opposition to pandemic restrictions, mandates and the erosion of civil liberties.

“The ongoing protests in the Beltline (area) have greatly impacted and compromised the safety, well-being and daily life of residents, visitors and businesses,” Gondek said in the release.

“Beltline residents, visitors and businesses have every right to lead their lives without fear and disturbance. It is time for protestors to voluntarily move to more appropriate venues.”

Calgary Police have said that they are preparing an “enforcement plan” now that the injunction was granted.

The Calgary Police Commission met Friday to discuss how they would respond to the protests.

Local mainstream news outlets have smeared the protesters as “invaders” and “professional protesters,” in line with similar allegations that were made against the Freedom Convoy in Ottawa in February.

Peaceful protesters and donors to the convoy had their bank accounts frozen and were met with a militarized police force composed of local, federal and provincial officers. One elderly woman was even trampled on by an RCMP horse as a result of the crackdown, reportedly breaking her clavicle.