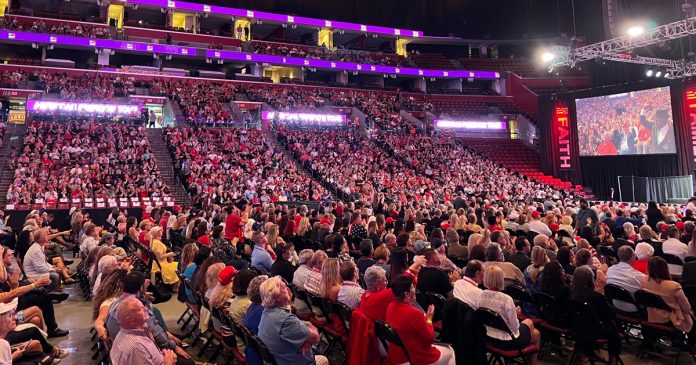 Former US president Donald Trump told a massive crowd at Panthers arena on Saturday that the country desperately needs saving from weak, ineffectual leadership and the Liberal ideology being forced onto its citizens.

“Biden has unleashed a chain of unmitigated disasters… we have to stop the madness,” Trump told the 12,000 attendees.

The same could be said for Canada under Trudeau.

We too are in crisis due to weak, ineffectual leadership, the perpetuation of radical ideologies and a mainstream media that is embarrassingly beholden to our prime minister. Considering how Trudeau abused his power during the recent peaceful Freedom Convoy protest, it is in some ways even worse – especially in how his media lapdogs allowed it.

Trump’s speech at FLA Live Arena was part of his latest in a series of Freedom tours across mostly southern states. Although most of the crowd had waited all day to hear him speak, they roared and applauded with enthusiasm at seeing the man they hoped would return to the White House in 2024.

The Biden administration provided plenty of material, and Trump took advantage of every bit of it. He targeted the oil crisis, the southern border disaster, the economy and leftist ideology that has forced critical race theory and gender fluidity concepts into elementary school classrooms.

The crowd cheered when he suggested that if he were president, Russian president Vladimir Putin would not have invaded Ukraine.

“Putin saw weakness (in Joe Biden),” Trump said. “When I was in the White House, there was peace through strength…they didn’t f— around with us.”

“If it had been Donald Trump Jr., you’d hear about it,” he said.

Trump Jr. then asked the crowd whether anyone could say with a “straight face” that America is better off under Biden.

“Maybe (this country) needs the incompetence of this administration to show people what they had under Trump,” he said.

Security was tight at Panthers arena, and The Donald proudly boasted more than once that he’d kept out the “Fake News.”

The attendees I met and interviewed appeared anything but the “basket of deplorables” depicted by 2016 presidential hopeful Hillary Clinton. In fact, most I spoke with seemed to know about Canadian politics, the recent dictatorial actions of our prime minister towards the peaceful Freedom Convoy and the impact of Biden’s arbitrary cancellation of the Keystone pipeline.

Kathleen O’Brien, originally from western New York, called Trudeau a “tyrant” who gets a minus-0 on her list.

Floridian Gary Morris said Trudeau was a “communist” who betrayed the country, imprisoned its people and “stole their money.”

Janett Coppola, who came all the way from New Jersey to the rally, said she loves Trump because he tells it the way it is. She said she felt 100% that Russia would not have invaded Ukraine under a Trump regime.

John Parker, another Floridian, said he came to the rally because the “world is going to hell in a handbasket,” and he doesn’t want to join it. He added that Biden was a “failure” from Day One.

Earlier in the day, a visibly pregnant Candace Owens sent quite a murmur through the crowd when she asked how many people in the room had been accused of being racist, sexist, homophobic and anti-vaxxers.

In a rousing speech, she contended that we are in the midst of WW3 – an “ideological war in which the left is fighting for our minds every single day.

“It’s not going to stop until we demand that it does,” she said to a chorus of applause. “I don’t recognize this country anymore.”

There were many lessons for Canadians from Saturday’s rally. The most important one is for typically passive Canadians to recognize that our country is also under siege.

Love him or hate him, Trump knows that to be true.

So do all of his supporters.